Taroudant - A huge fire broke out at Baitul Futuh mosque in Morden in south west London on Saturday. 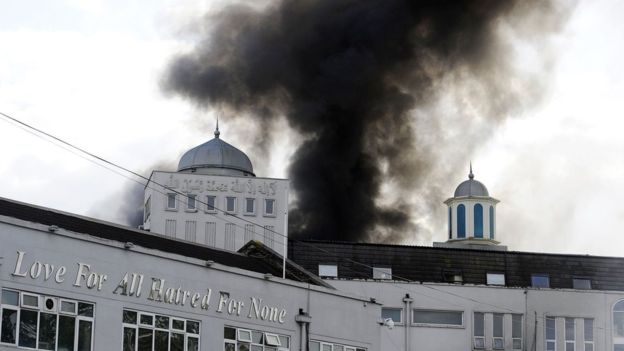 By
Larbi Arbaoui
-
Larbi is a freelance writer and assistant editor at Morocco World News.
Sep 27, 2015
Spread the love

Taroudant – A huge fire broke out at Baitul Futuh mosque in Morden in south west London on Saturday.

The mosque, which presents itself as Western Europe’s largest mosque, caught fire after midday.

According to BBC, “the brigade was called at just after 12:00 GMT+1 to the mosque, which also has a community center attached.”

Immediately after the brigade was called, 70 firefighters were dispatched to the scene to tackle the blaze, which was under control by around 17:30 GMT+1.

The few worshipers who were inside the mosque when the blaze started were evacuated from the site, and only one man has been taken to hospital to receive treatment after inhaling smoke.

“About 50% of the building’s ground floor was damaged as well as part of the first floor and a section of the roof,” BBC said.

According to the same source, two teenage boys, aged 16 and 14, have been arrested earlier on Sunday on suspicion of arson at the Baitul Futuh Mosque.

Stephen Alambritis, Merton council leader, described the mosque as a “beautiful” and a “major landmark”, adding that the damage would be a “big blow” to the community.