United Nations - Peace and stability in the Middle East inevitably pass through the end of the Israeli colonization of Palestinian territories, including Al-Quds, Foreign Minister Salaheddine Mezouar said Saturday in New York. 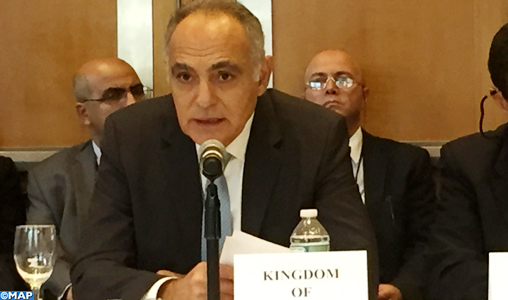 United Nations – Peace and stability in the Middle East inevitably pass through the end of the Israeli colonization of Palestinian territories, including Al-Quds, Foreign Minister Salaheddine Mezouar said Saturday in New York.

“We shall anew bring to the attention of the international community, including the UN Security Council, that peace and stability in the Middle East pass through the end of the Israeli occupation of Palestinian territories, including Al-Quds”, Mezouar said at a meeting of the Ministerial Contact Group of the Organization of Islamic Cooperation (OIC) to defend the cause of Palestine and Al-Quds, held under the chairmanship of Morocco on the sidelines of the 70th session of the UN General Assembly.

Mezouar warned that “imposing a fait accompli through the policy of colonization, expulsion, harassment and racial discrimination, and the burial of the two-State solution are a danger to all parties, including Israel”.

In this regard, he called for implementing international law and the decisions of international legitimacy on the protection of civilians in time of war, and recognizing the right of Palestinians to establish a State on its territories occupied since 1967.

“The actions of Israeli authorities in Al-Quds, including the illegal annexation, colonization and Judaization of the Holy City, and the alteration of its demographic composition and its Arab-Muslim identity are devoid of all legitimacy”, he said, stressing the importance of putting an end to these actions and “making sure they never happen again”.