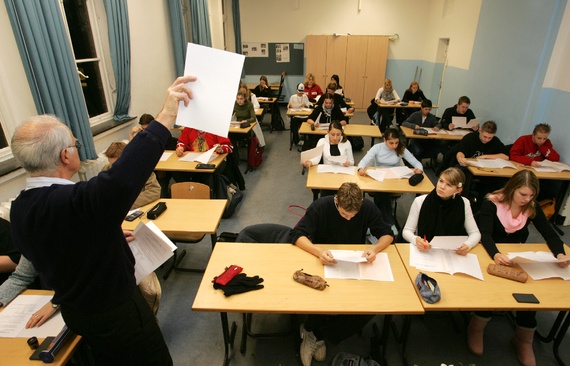 Rabat – The tendency of studying abroad has always been hugely dynamic, particularly within the globe’s most developed nations such as the United States. A rising number of gifted, young students, primarily originating from developing countries, express their firm desire to pursue their education elsewhere. Moroccan students are not an exception. Drawn by their sense of challenge and their passion for embracing a new culture, students find themselves in a face-to-face confrontation with many barriers, posed by either their homelands or their intended destinations.

Many developed countries with sophisticated education systems contribute to the trend by offering international students the opportunity to study abroad. For instance, the United States is home to more than 4,000 universities and colleges, offering a diversity of study programs in favor of both domestic and international scholars. Specifically, international students, numbering almost 900,000 in 2013-14, may receive special grants and scholarships as award for their talents and academic excellence. Most appealing about studying in America is the pluralist, multicultural, and accepting aspects of the country. Additionally, universities have strong wills to promote cultural, ethnic, and religious pluralism on campus. Studying abroad in the United States presents enormous academic opportunities for international students.

As promising as studying in America might appear to be, various factors can make it challenging for even ambitious, young outsiders. Despite the relatively large number of international students, more than half of them come from only three countries – China, India, and South Korea – leaving fewer spots for students from the developing world. Another challenge is the recognizably extravagant cost of studies that can rise to $50,000 per year or more. This is a major constraint for even American citizens. Also, scholarship funds destined to international students are often scarce and extremely competitive.

The forms of financial aid available in the U.S. vary from governmental to private to university-funded scholarships. Government scholarships, as the appellation suggests, represent the government-funded forms of financial aid. Launched by the U.S. government, these are aimed at international students from particular geographic locations (i.e. Latin America, the Middle East, and North Africa) on the basis of an agreement between the American government and the government of a given state. A well-known example is the Fulbright Program, with funds emanating from the U.S. Congress. Private scholarships, on the other hand, rely on charitable organizations, NGOs, and other institutions and may cover full tuition fees and living expenses. These, too, are merit-based and arduous to obtain, for they are highly competitive. Ultimately, university scholarships or internal scholarships are sometimes strictly reserved to domestic or state resident students and do not cover the entire study costs. Depending on their merit and exceptional academic abilities, international students can choose the mode of financial assistance that best suits them.

In addition to the financial situation international applicants face, their own home countries may indirectly make their study abroad journey more complicated. Morocco can do better, especially by taking a set of adequate measures in order to assist its protégés to conquer foreign universities. Firstly, it can do so by including English as a language of instruction. This would help Moroccan students gain the level of English proficiency required by American universities and enhance their capacities of conducting research in many fields of study. Moreover, the Moroccan state should encourage ambitious academic and scientific research projects in order to attract and partner with leading American institutions to share ideas and expertise. Only a few of these exchanges between highly qualified American and Moroccan students are currently taking place, mostly in the renewable energies field. Lastly, public schools are called to establish partnerships with the different American schools present nationwide for the purpose of introducing the American study system to Moroccan pupils. Morocco, then, can undeniably acquire an acknowledged academic status in the U.S. and the world by enabling and encouraging its scholars to study abroad.

Studying abroad constitutes an advantageous academic, cultural, and educational enrichment for international students and their host universities and host countries. However, its various costs and constraints must be meticulously considered by applicants. Morocco and other countries can play a vital role in ensuring a successful and safe study abroad journey for their students.