Taroudant - Saudi Arabian Ministry of Heath allegedly published on Tuesday a statement on its official website saying the death toll in the recent Mina stampede has reached 4,173, but the statement has been taken down since then.

By
Larbi Arbaoui
-
Larbi is a freelance writer and assistant editor at Morocco World News.
Oct 1, 2015
Spread the love

Taroudant – Saudi Arabian Ministry of Heath allegedly published on Tuesday a statement on its official website saying the death toll in the recent Mina stampede has reached 4,173, but the statement has been taken down since then.

Ever since, the alleged announcement was taken down from the website, but some internet users and news websites managed to take a snapshot before it was removed.

The snapshot of the statement claims that Mohamed Aldowale, the Saudi Deputy Minister of Health, stated that the ministry handed over a photo album with photos of 4,173 pilgrims who were killed in Mina accident, and the process of identifying the bodies has started. 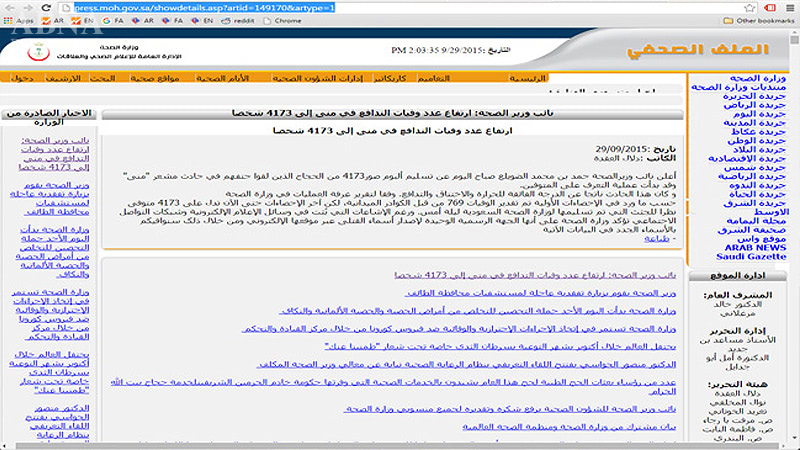 The same source added that the big number of death was due to heat, suffocation and stampede, according to the report by the Minister of Health.

“The primary statistics indicated 769 deaths however our final numbers have increased to 4173 deaths after the ministry received several more bodies yesterday,” the statement says.

A twitter user posted the snapshot of the statement on his twitter account tagging the Saudi Deputy Minister of Health with a question that reads: “Is this from the ministry website? The statement is attributed to you, and the site looks like the ministry’s official one.”

The Ministry of Heath posted a tweet on Thursday denying the statement attributed to the Saudi Health Ministry’s official website.