Tangier - For years, fantasies of Morocco just drew me in. I could sit and read for hours about the country of camels trekking across vast deserts, markets flooded with exotic foods and spices, and the women mysteriously wrapped. I wanted to personally experience these things so badly, that I saved my money for a year to buy a plane ticket and make my dream of visiting Morocco come true. With ticket in hand and baggage checked, I boarded a plane from the U.S. and headed to Africa. 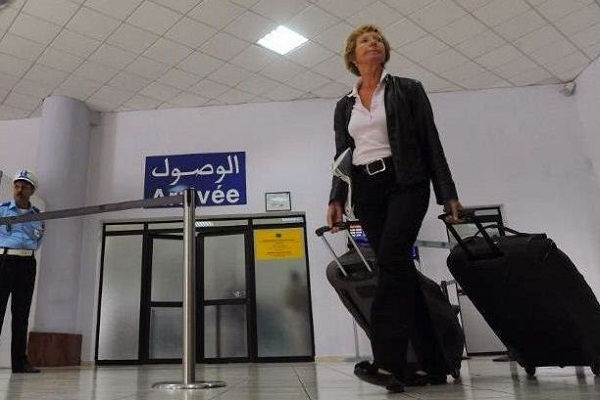 Tangier – For years, fantasies of Morocco just drew me in. I could sit and read for hours about the country of camels trekking across vast deserts, markets flooded with exotic foods and spices, and the women mysteriously wrapped. I wanted to personally experience these things so badly, that I saved my money for a year to buy a plane ticket and make my dream of visiting Morocco come true. With ticket in hand and baggage checked, I boarded a plane from the U.S. and headed to Africa.

When the airplane wheels hit the runway, I was more than ready for my adventure of a lifetime to begin! As I walked through the arrival hall at Casablanca airport, I saw a broad diversity of skin colors, manners of dress and languages. Even though I am an American and used to diverse people, it was not what I had expected in Morocco. Looking around gave me confidence and I knew I would fit right in.

The immigration and customs area was extremely busy and it wasn’t clear where to go because I couldn’t read French or Arabic. I saw people gathering in a narrow space between some ropes, so I headed there. These designated “single file lines” had three or four people abreast. People young, old and in between, pushed and shoved in front of other people without saying “excuse me” or “please, may I.” I saw no reason for the hurry; I figured people were just tired and anxious to get home. I got bumped more than a few times, scraped on the leg by some luggage and people stood so close they were actually touching me! It was hot and we were all sweaty. Between the crowd of sweaty people and the thousands of un-brushed teeth from overnight flights, I really missed my personal space more than I might have otherwise.

I had additional trouble trying to find the train station. A well-groomed man, who said his name was Omar, approached me and said he could help. He asked me where I was from and told me that English was his favorite language. Then he said that I should meet his cousin, a tour guide. He said he could get me a good tour price. He offered to show me to the station entrance and a few minutes later, we arrived. I was getting ready to thank him for his kindness when he told me to pay him 30 dirhams for his service.

At the airport train station, the person issuing tickets for the train spoke English and she explained to me that I would first go to Casablanca and then board a different train to Rabat. I decided to splurge on a first class ticket. Once at Casa Voyageurs, I waited for the Rabat train. The platform was full and all of the seats were taken. The train was about twenty minutes late and standing that long was hard on me because I was so tired after my long flight. When the train arrived, I thought, “Finally, I can sit a while, relax during the ride and enjoy the scenery!”

I slid open the door to the compartment and said, “Good morning!” but it didn’t seem to make me any friends. On one side a woman was sleeping over all three seats. Across, a man sat in the window seat and a woman beside him, leaving one seat open by the door. I realized that the man was in my ticketed seat, so I said, “Sorry, that’s my seat.” “Ma-fahemtsh,” he said blankly looking past me, speaking to the hallway and then went back to his newspaper. Then in my best, but not very good French accent, I said, “Pardon,” pointing to my ticket and then the seat. He ignored me, so I focused on my luggage.

My bag was heavy and the storage area was above my head, so I struggled to lift it up as all three people now watched me. Both women glared at my knees, which were exposed below my skirt while I was trying to lift my bag. Feeling now like a piece of raw meat on display, I sat down. A minute later Mr. “Seat-taker” stood and left. I wanted my seat, but I thought it would be rude to move his newspaper and jacket.

Soon, I started to smell cigarette smoke. At the end of the train car, Mr. “Seat-taker” and another man were enjoying cigarettes, standing under a “no smoking” sign. The ONCF (Moroccan train authority) ticket-taker was chatting and laughing with them. In my first few hours in Morocco, I had learned: (1) a ticket does not make your seat yours and (2) a “no smoking” sign means that it’s ok to smoke.

I needed to relieve myself of the mass amount of water I had drunk on the plane, so that I had to pass the smoking men on the way to the bathroom. I tried to wait until the men were finished smoking, but they lit up another and kept chatting. So, I ventured toward my goal. As I squeezed by the men, they stopped talking and just stared at me. I found the “first class” restroom door rusty and stuck and as I tried to force it open, the men simply watched, clearly amused by my attempts. Feeling embarrassed and frustrated, I finally kicked the door and it opened with a loud bang.

As I shrank inside the small space under the continued stares, I closed the door to my new sanctuary. Once inside, I saw that my “first class” bathroom had a rusty, metal sink with a constantly dripping faucet, the mirrors were etched with graffiti and what looked like hand soap was slopped in a disposable plastic cup. The liquid had been muddied by people’s hands reaching inside and it had become dirty soap! The seat of the toilet did not match its base, was cracked, stained and had cigarette burn marks; it looked as if it had been found in a junk yard and it was not inviting me to sit! The toilet bowl was not holding water, but dumped into an open hole to the ground. I watched the track rushing by at the bottom of it and wondered how much human waste had been dumped onto it over the years. That thought made me sick.

Unfortunately, I had no other option than adding to the waste, so I did. My foresight to travel with a packet of tissues had been smart; there was no toilet paper or any paper product of any kind. But, I had to wrap up the used tissue and put it in my purse because there was no trash can and I did’t want to litter. In all honesty, I never considered myself spoiled, but this bathroom experience made me so uncomfortable.

My bathroom experience left me feeling dirty and smelling like cigarette smoke. When I returned to my compartment, the sleeping woman was now in the seat I had first taken. My things had been moved to another seat, I assumed by her, but she never looked at me or said a word. In hind sight, it probably was a bad idea to leave anything unattended on a train in Morocco.

As we were traveling through a beautifully picturesque landscape, I started to finally relax. But then the train began to slow and soon came to a complete stop. After a moment or two of waiting in the middle of nowhere, without notice or explanation, the engine and air conditioner were turned off. As I looked around me for an explanation, I noticed that none of the other people looked concerned, so I turned to my book and waited. A half an hour later, as suddenly as we stopped, thankfully we began to move.

By now, it was really uncomfortably hot and I was sweating and thirsty. Unfortunately, I did not see any place where I could purchase water. I learned later that a man with a cart has snacks and drinks available on the train, but that day, he did not appear. During the rest of the journey, the train made two more unannounced, unexplained and lengthy stops. It seemed to me like we were stopping to wait for an oncoming train to pass, and eventually one always did before we started up again. In some spots, there was only one track when two were clearly necessary to keep the time schedule. It did not make sense to me and we were very late to arrive.

My scenic, “first class” 2-hour train ride to Rabat, turned into a 4-hour, unpleasant experience. When I de-boarded the train, I was exhausted, dehydrated and out of sorts. But, I was happy to have arrived at the train station’s front door, however short-lived. Right away, several dirty and smelly men came towards me asking for money. Other men were trying to get my attention by speaking French (which I did not understand) and others stared at my bare ankles and arms, freely looking me up and down. Even though I was wearing a skirt below the knee and a black shirt up to my neck, I felt like these people felt it appropriate to disrespect me. It is ONLY because so many people were around that I felt even the slightest bit safe.

At this point, all I wanted to do was to go to my hotel and shower! People were getting into both large white taxis and small blue taxis and many were simply walking from the station. Men were waving me to their private cars. My brain swirled while I tried to figure out what to do. In my confusion and state of high anxiety, I must have looked like a crazy person. It was then that an angel, disguised as a well-dressed woman, gently took my arm. She spoke to me in broken English but in a very sweet and reassuring voice. She told me to take a blue taxi and to make the driver use the “kontur” (meter). She wrote the name of my hotel, in Arabic, on a piece of paper so that I could simply hand it to the driver. She left me, saying something in Arabic, which later I learned was, “May God bless you.”

This angel restored some of the excitement for my trip that I had lost along the way, making me smile in spite of it all. However, my first impression of Morocco was already set in stone. The land I had dreamed of for so long and for which I worked and saved my hard-earned money to visit, had, in little more than an instant, become frightening and unwelcoming for me, a woman traveling alone.