Miami - Anthony Martial, Manchester United’s new sensation, continues to make headlines with his performance. Martial has captured the attention of the media and the football world, with many observers praising the French star. 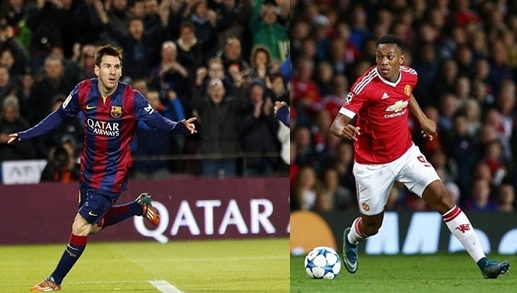 Miami – Anthony Martial, Manchester United’s new sensation, continues to make headlines with his performance. Martial has captured the attention of the media and the football world, with many observers praising the French star.

This time, the Red Devil’s No. 9 has been compared to Argentine international, Lionel Messi. English football expert and former Liverpool midfielder, Jamie Redknapp, did not hesitate to point out the similarities between the former Monaco player and Barcelona’s star striker.

“I watched Anthony Martial play for 90 minutes in the Champions League, and the only other player in 19 years I have seen better at this age, is Lionel Messi,” stated Redknapp on Sky Sports.

The English commentator, who captained Liverpool and Tottenham, recognized the skill in the 19-year-old forward who goaled both of his former teams during his debut this season, bringing the win to his new team, Man United.

Having played alongside other current champions in their debuts, the football expert stressed, “Martial shows such intelligence!”

“He knows when to pass the ball, when to dribble, when to shoot… He clears his opponents as if they were not there,” he added.

??o dare a comparison to such a superstar as Lionel Messi, the 4-time Ballon d’Or winner, is a bold move., Nonetheless Redknapp stressed that  the French youngster will “become a superstar” undoubtedly  reaching Messi’s stature.

“All he [Martial] does is anticipated, thought out in advance. It’s like he’s always ahead of the others. I love watching him play, he will become a superstar.”

Following his outstanding goal-scoring debut, Martial has earned comparisons to some of the greatest in football, such as French legend Thierry Henry and received praise from other international legends like England’s David Beckham.