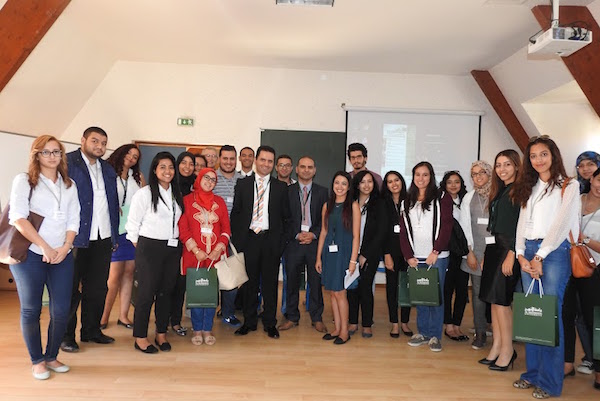 Speakers addressed the topic of leadership, describing their own journeys as professionals and emerging leaders.

At the conference’s opening, Duncan Rinehart, assistant professor of management at AUI and Director of the leadership insitute, introduced the overall goal and the importance of the conference. “The event is designed to bring student together and address how we can develop leadership in Morocco through discussion and speakers’ presentations, and also to give our students the chance to arrange and organize the event, which in itself is a form of leadership.”

Samir Bennis, a political analyst and Editor-in-Chief at Morocco World News, described obstacles he had had to overcome on his journey he has experienced along the way, in his mission to achieve his short term and medium term goals.

“I went to New York unable to speak English, but I eagerly started learning English right away. Now I speak fluently and write the news and articles for an English speaking audience.  The determination to value hard work and leadership will prompt a change in Morocco to a better one.”

He also stressed that civil society must wake up from its hibernation to defend Morocco’s national interests. “Moroccans should be mobilized all year long to defend their national causes, especially the question of the Western Sahara.”

“Yes we all know that most Moroccan officials only care about their own interests and that of their families and couldn’t care less about the layman and women,” he said.

“But this should not cloud the picture for us and push us to be defeatist. Quite the contrary, in a country like Morocco where there is too much to be done, I firmly believe that our country and our communities need every bit of us. If every of one us present here and other Moroccan youth could exploit their potential to the fullest, we cannot imagine the impact this could have on our country at large and our immediate communities,” he added.

Lamia Bazir, currently working in the office of Head of Government, and a former AUI student described how she was thrilled to see current AUI students wholeheartedly express their positions and take the initiative to contribute to the development of the country.  She also described the challenges of leadership for women, drawing on her early experiences, and tackled the issue of why women are marginalized in positions of leadership. Correcting a common misperception of what is a “leader,” she said “Leadership is not about reaching the summit, but about unleashing your creativity, exploring who you are, and influencing people around you and beyond in the world at large.” 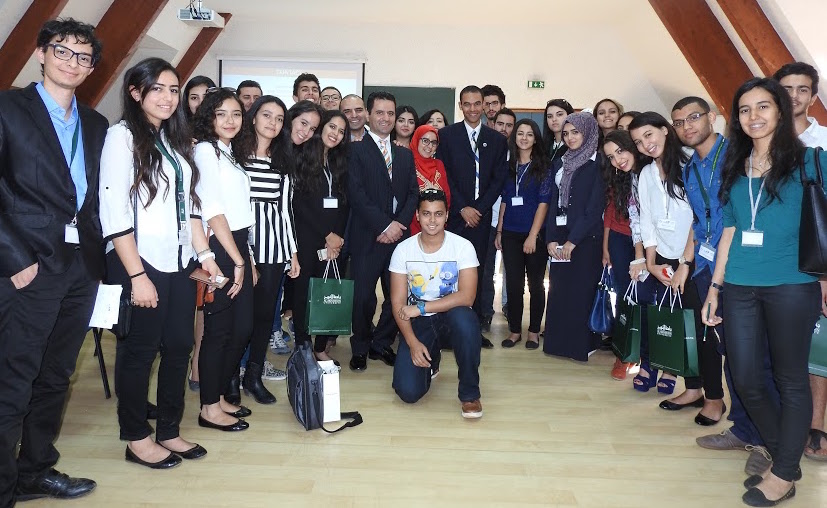 Representing MWN as the leading English news outlet in the region, Adnane Bennis, co-founder and Managing Editor of MWN, described impediments he had confronted in the United States and how he has managed to jump life’s hurdles. He described MWN as a bridge to the worldwide mass media and how the news outlet, which was launched in 2011, has become influential throughout the world. Adnane unveiled MWN’s upcoming project, “MWN Junior,” a new project to support the creativity and development of younger readers.

The conference featured an enthusiastic debate among the delegates at the presentation of Hicham Zerhouni, a 2015 New Leaders Council Fellow. He delivered a groundbreaking presentation on controversial issues in Morocco, including Morocco’s ailing educational system and the lack of participation of youth in politics and elections.  He emphasized the significance of voting against corrupt politicians to promote candidates with integrity and eradicate corruption.

Around seventy students participated in the event, many from AUI and other Moroccan universities, all with fluency in English. Kawtar Benhammou, a senior business student, strongly endorsed the event. “What I liked the most was the different inspiring stories of the speakers. The common theme is that we should lead by example, because people are inspired by what we do more than what we say.”

LDI aims to inspire its participants by offering leadership prospects and expanding the annual conference to attract more future leaders. Luana Morales, a Brazilian student and one of the event’s main organizers, said: “We seek to raise awareness in Morocco regarding leadership and open the floor for discussion to promote and achieve leadership in different fields.”

“We want to grow the conference in the future because Morocco has lots to offer and youth needs only opportunities to share their common ambitions in order to contribute to the development of their community,” she concluded.