Rabat - King Mohammed VI inaugurated the library of the Alaouite dynasty in Rabat on Friday, which will serve as a center of history and memory for current and future generations. 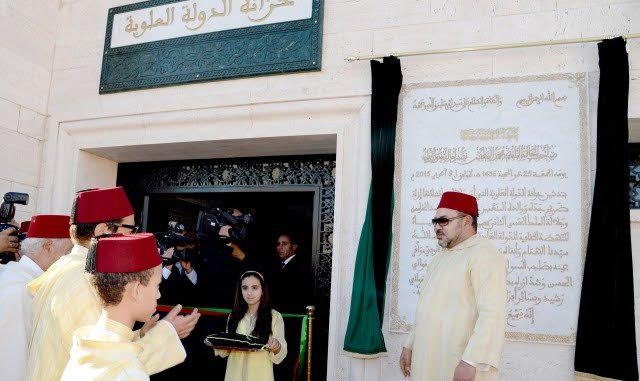 Rabat – King Mohammed VI inaugurated the library of the Alaouite dynasty in Rabat on Friday, which will serve as a center of history and memory for current and future generations.

Located near the Mohammed V Mausoleum, the library, which was built on the orders of King Mohammed VI, is home to a collection of rare books and precious manuscripts that reveal the rich history of the Alaouite dynasty, the current Moroccan royal family, since its founding.

This building houses a rich library, containing many books on the Alaouite dynasty in various cultural, political, economic, and social domains.

The library has a wide collection of historical documents, including trade and diplomatic agreements made during the reign of Alaouite Kings and Sultans with other states and empires, as well as correspondences with Kings and Foreign Heads of State.

The library also houses copies of “Dahirs” issued by Alaouite Kings and allegiance treaties, in addition to academic theses on the Alaouite dynasty and history.

The collection of such documents is made possible through the contributions from several donors, including the library El Hassania, the Royal Archives, the National Library, and the Ministry of Endowments and Islamic Affairs.

The administration of the library was entrusted to Abdelhak Lamrini, the kingdom’s historian.