Tangier - Being from a beach town in the U.S., my wife and I would often walk the sandy shore looking for “sea glass.” Sea glass is glass that has been discarded into the sea, and after years of washing ashore and being swept back out again, it becomes smooth and beautiful, much like a gemstone. It is only natural that when we came to live in Morocco that we would seek out the pristine beaches, walk the unspoiled shores and look for sea glass. As we continued our quest here, we were not disappointed.

Tangier – Being from a beach town in the U.S., my wife and I would often walk the sandy shore looking for “sea glass.” Sea glass is glass that has been discarded into the sea, and after years of washing ashore and being swept back out again, it becomes smooth and beautiful, much like a gemstone. It is only natural that when we came to live in Morocco that we would seek out the pristine beaches, walk the unspoiled shores and look for sea glass. As we continued our quest here, we were not disappointed.

In the U.S., the majority of the sea glass we find is brown. It is not difficult to determine the source of this brown glass; a lot of beer is consumed there and most of the bottles of beer sold are of that color. However, as we gathered our gems from the Moroccan water’s edge, we began to notice a different trend: all the glass was green. There was an occasional clear piece or even a brown piece, but by and large, the overwhelming color was green. 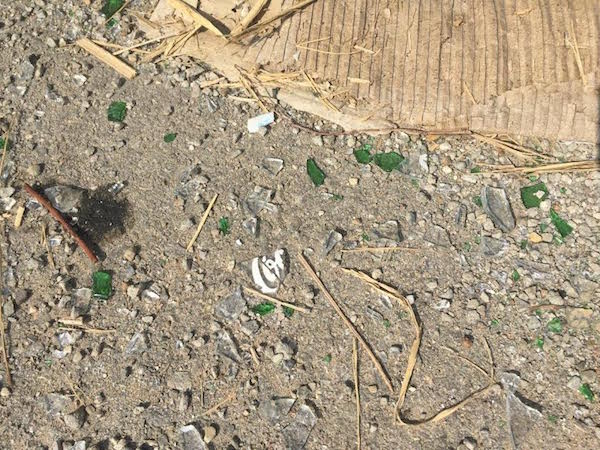 We asked ourselves, why is all this green glass here and where did it come from? Not having an answer for these questions, we started to look around to see if we could solve the riddle; what are the sources of green glass in Morocco? The only green glass that we could think of was for beer bottles. However, we are under the understanding that drinking alcohol is forbidden in Islam and so we started our search in more mundane places, such as our local souq (market). On our way to the souq, we were now acutely aware of the green glass and our eyes immediately began to see it all over the place! Looking at the sidewalks and roads between our house and our local souq, we noticed that the green glass is practically everywhere! When we reached the souq, the only green glass bottles we could locate were bottles that held mineral spirits, which are often used in cleaning up paint or in mechanical work. However, these bottles were few and far between. The mystery of the green glass remained.

Now, having spent almost 3 years in Morocco, we have had countless opportunities to travel this beautiful kingdom, meet its wonderful people and share its exciting and colorful culture. As we traveled throughout the land, we kept seeing green glass on the ground. From Tangier in the north to Zagora in the south; from Rabat to Figuig, broken green glass was in every city, town and village. It litters streets, sidewalks, dirt roads and parking lots. There is no place that we have seen, including the desert, which did not have this green glass scattered about.

We have ruled out what the glass is not, it is not from the mineral spirit bottles; as there would have to be an astronomical amount of painting and mechanical work going on to even begin to account for the sheer volume of this glass. However, on the day of Eid, the mystery appeared to have been solved. We were walking down a street, on our way to a friend’s house to celebrate the holiday when we saw a man walking with his friends, laughing and having a good time, holding a green bottle in his hand.  It was a Heinekin beer! We had never thought about that possibility, as drinking is haram, but it certainly makes sense in hind sight.

From the men smoking cigarettes in every café, to the extensive amount of green glass beer bottles, a person could conclude that in Morocco, the laws of Islam serve only as guidelines. Given this trend of behavior, what can we expect next, not fasting during Ramadan? Not washing before prayer? Not eating halal? Are people allowed to choose which laws (secular and non-secular) are important enough to follow and discard the rest? As always, we leave these questions for others who are more knowledgeable and learned than we.