Rabat - Moroccan women are participating in Ford Motor Company’s campaign to fight breast cancer, “Warriors in Pink.”Created in 2006 by the auto giant, “Warriors in Pink” is an organization dedicated to “raising awareness through unique media content, to giving breast cancer patients and survivors more good days.” 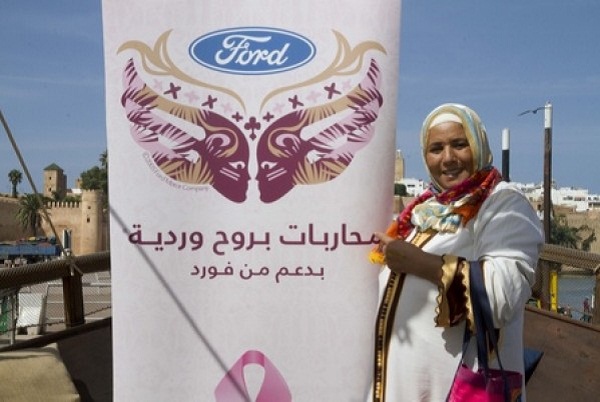 By
Rebecca Sawatzki
-
Rebecca Sawatzki is student of International Relations pursuing a bachelor’s degree at Loyola University Chicago with minors in Arabic and French Languages.
Oct 13, 2015
Spread the love

Created in 2006 by the auto giant, “Warriors in Pink” is an organization dedicated to “raising awareness through unique media content, to giving breast cancer patients and survivors more good days.”

Along with their media presence, they sell unique warrior themed accessories, splitting all profits from the sales among four breast cancer organizations, Young Survival Coalition, Dr. Susan Love Research Foundation, The Pink Fund, and Susan G. Komen. Since its creation, the organization has raised over 120 million dollars for cancer awareness and research.

This year, five Moroccan survivors from a breast cancer awareness organization called “Jannat” participated in the campaign. Jannat is a social media based association which “organizes social events and uses the social media to raise awareness for social and environmental issues” according to their mission.

The survivors, Fatiha Aziz, Milouda Dibi, Fatima Benhammou, Aicha Rabeh, and Khadija El Qorti were recently photographed in Rabat wearing the accessories from “Warriors in Pink.” The photos were aimed to not only advertise the merchandise, but also share survivors’ stories and ideally make them role models for other fighters.

Sue Nigoghossian, Executive Director of the Communication to the Ford Office in the Middle East and North Africa said on the issue, “Supporting women in their fight against breast cancer is essential to their speedy recovery, that’s why we encourage everyone to join us in this fight. We are excited and proud of the success of the Campaign ‘Warriors in Pink’ and we hope to expand the sphere of awareness on the subject of early diagnosis in Morocco and the region.”

“Warriors in Pink” has been successful in raising money and also educating people about breast cancer screenings, early diagnosis, and financial assistance opportunities. The organization also hopes to positively affect the psychological state of fighters and survivors.