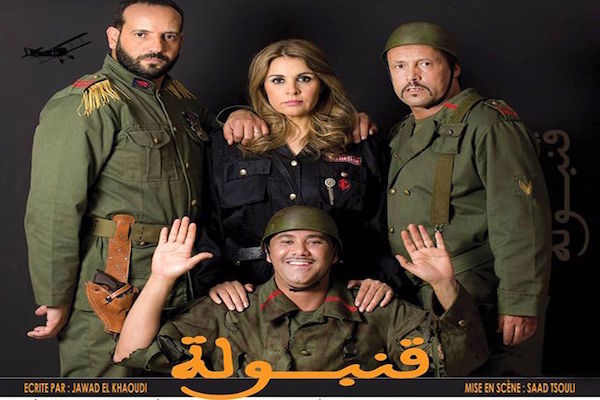 Rabat – The ‘Achihab’ theater group opened the new artistic season of the National Theater Mohamed V in Rabat on Saturday, October 10 at 8:00 pm, with their play “A Bomb.”

The play is written by Jawad El Khoudi, directed by Saad Tsouli, and produced by Rachid Jandal.

Fatima Khair, Saad Tsouli, Benaissa El Jirari, and Jawad El Khoudi will present a comedy mixed with pain and tears. “A Bomb” is the story of four Moroccan soldiers that volunteer to fight in the French army in World War II against Hitler.

During the play’s two and a half hours, the Moroccan battalion goes through different situations where fear and hunger and cold mix because of a Nazi siege. Thus, the terror dominates the soldiers’ minds, who have been looking for ways to break free of the dilemma.

The comedic play addresses the national dimension of soldiers defending the colonial flag in order to free their own country from French colonialism. The resistance spirit is also discussed in this play, in addition to the desire to survive in a battalion in which 998 of its soldiers were killed.

After a very long absence, Fatima Khair will meet her fans again in “A Bomb.”

The Moroccan star will not play with her husband for the first time. The ‘Tsouli’ couple has participated in many works together, such as ‘Class Number 8’ in 2003.