Rabat - Swedish security expelled on Thursday two Sahrawi activists, Lahcen Mahraoui, member of the Royal Advisory Council for Saharan Affairs (CORCAS) and Rokaia Derhem, Member of Parliament, denying them the right to reply to Aminatou Haidar who was speaking at a conference held in the Swedish Parliament. 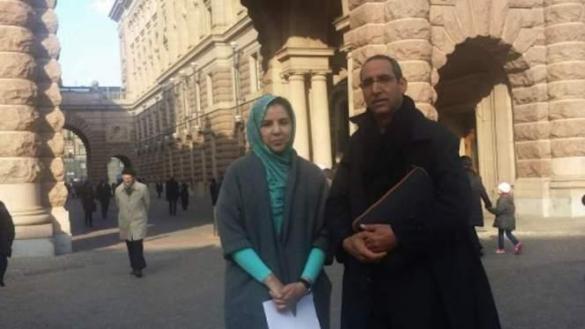 Rabat – Swedish security expelled on Thursday two Sahrawi activists, Lahcen Mahraoui, member of the Royal Advisory Council for Saharan Affairs (CORCAS) and Rokaia Derhem, Member of Parliament, denying them the right to reply to Aminatou Haidar who was speaking at a conference held in the Swedish Parliament.

Organized by members of the parties of the Social Democrats and the Greens, known for their support for the Polisario, the organizers denied the two Moroccan activists the right to speak at the conference, and forced them out of the parliament.

Mahraoui denounced the “aggressive move” and “unjustifiable” behavior of the Swedish politicians.

“That’s a shame! Where are the values of democracy and free expression, if we cannot even give our views as Sahrawis, who are the real representatives of the great majority of the population of the Sahara,” Mahraoui said while he was still inside the Swedish parliament.

“We have listened carefully to the allegations, the lies and insults directed by Haidar and her friends before asking to speak in the most civilized way to enlighten the audience on the other majority’s view about this regional dispute,” Derhem said in a report aired by 2M TV channel on Friday.

“But we were denied our right to reply which is in stark contradiction with the values of democracy and freedom of speech hailed by Sweden,” she added.

“We have not made such a decision and have not expressed anything that is even close to it,” he said.