New York - A video of a black woman verbally attacking Muslim women with racist insults onboard a London bus has gone viral. 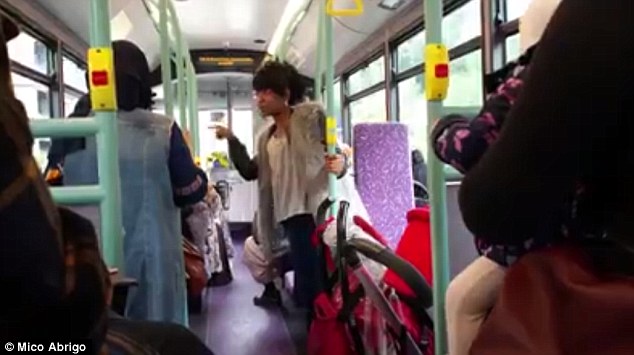 By
Karla Dieseldorff
-
Karla is an award-winning actress and producer.
Oct 17, 2015
Spread the love

New York – A video of a black woman verbally attacking Muslim women with racist insults onboard a London bus has gone viral.

According to UK’s Daily Mail, on Tuesday at 10:30 am local time, a five-minute video shows a woman shouting racist offenses at Muslim women wearing a veil on the 206 bus in Willesden.

The woman who was traveling with an infant in a stroller, began screaming to the surprise of the other passengers and called the Muslims “sandbags” and “Isis b****es” among other insults.

The attacker pointed her finger at the Muslim women’s faces shouting: “Talk your f***ing language. Keep laughing. Ha-ha-ha-ha-ha. With your bombs hiding underneath your clothes.”

“I don’t f***ing like you people because you’re f***ing rude. You come to England and you have no f***ing manners. Go back to your f***ing country where they are bombing every day, don’t come here where we are free,” she added.

The Muslim women who were later found to be of Moroccan origin, stayed quiet and received the offensive remarks without fighting back.

The verbal slandering escalated to a point where the Muslim woman identified as Umm Lina approached the bus driver and asked him to call the police; yet, he allegedly replied, “You can do that yourself”.

“I would’ve expected someone to stand up for me and my family and friend as I don’t speak English, especially the driver,” the victim said through an interpreter.

The black woman’s screaming scared her own child who reportedly asked her what was happening and she was quoted as responding, “What happened? What happened? Isis got into the country, that’s what happened.”

In a statement to the Evening Standard, the victim Umm Lina, a Moroccan-born Italian national who speaks French, Italian and Arabic, said she was scared and upset at the woman’s attacks.

‘I was scared and anxious….I am heavily pregnant and I was standing as well, so I was really stressed and upset because I couldn’t understand what she was saying,” she told an interpreter.

According to the same source, the 36-year-old black woman has been arrested by the Metropolitan Police in Willesden and taken into custody at a police station in North London.

The attacker, whose name has not yet been revealed, was charged with a “racially aggravated public order offense.”