New York - German's defender Shkodran Mustafi, who plays for Spanish club Valencia, sat down for a press conference on Thursday and pushed away from him a sponsor’s beer bottle. 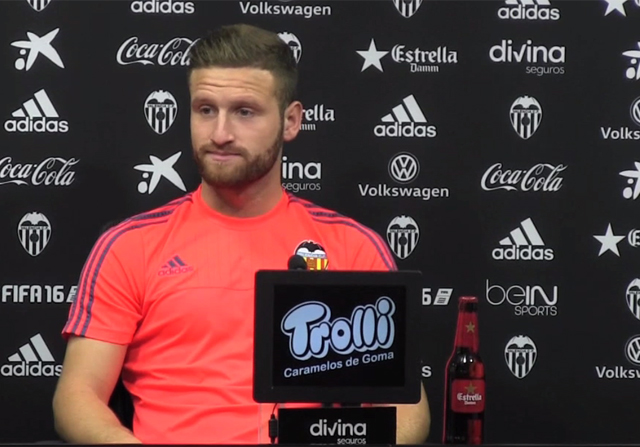 New York – German’s defender Shkodran Mustafi, who plays for Spanish club Valencia, sat down for a press conference on Thursday and pushed away from him a sponsor’s beer bottle.

According to a video posted by the Business Insider, Mustafi who is a Muslim is confronted by a club official who grabs the beer bottle and puts it back where it was before the player moved it.

The German international tells the soccer club’s representative in Spanish, “I do not want this bottle of beer in front of me” (“Yo no quiero la birra”), but the official allegedly talks him out of it and makes him keep the sponsor’s beverage in front of him.

The Valencia defender jokingly tells the man, “I’ll kill you, one day…fiuuu” (“The mato, un dia”), as he was forced to have to pose with an alcoholic beer against his will.

Mustafi, a devout Muslim as described by German news website Süddeutsche Zeitung, is prohibited by his religion to pose or consume any intoxicating substance such as alcohol.

This is not the first time a Muslim player refuses to appear next to a beer bottle. Moroccan international Mehdi Benatia, did not want to hold a glass of beer during a Bayern Munich’s photo shoot last August.

Benatia and the other players’ decision was respected by the Germans, and they were not forced to pose holding the beer glass next to their teammates at Munich.

According to the same source, North American teams as opposed to European teams, do not use alcoholic beverage companies as sponsors, which avoids this kind of problems.