By
Larbi Arbaoui
-
Larbi is a freelance writer and assistant editor at Morocco World News.
Oct 19, 2015
Spread the love

The devices running iOS9 features a keyboard which used the Tifinagh Unicode font.

For those who prefer switching their language settings of their iPhones into Tamazight, it is now possible. It can be done by going to Settings => General => Language Region ==> Language iPhone: then, from the list of languages choose Tamazight.

This will change the whole phone to include a full translation of the operating system written in Tifinagh, the Tamazight alphabet.

To simply activate the Keyboard, users may do so by going to Settings->General->Keyboard->Keyboards-> Add New Keyboard and select Tamazight keyboard from the list.

In 2012, Microsoft announced that Windows 8 was available in 14 new languages, including Tamazight.

To date, two keyboards are available for those who wish to to type in Tamazight: the Latin alphabet used in Algeria and the Moroccan Tifinagh alphabet with two input methods (Tifinagh-based alphabet keyboard, and extended keyboard. The Tifinagh keyboard is the one used by IRCAM (Royal Institute of Amazigh Culture in Morocco)).

The Amazights are living on the hope that Google will follow in the footsteps of the two giant tech companies and integrate Tifinagh in its Android operating system and in the Chrome browser. 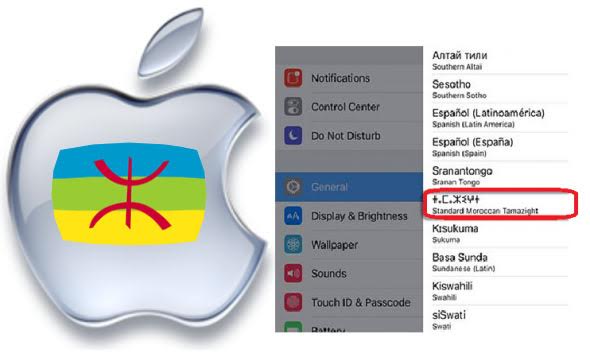