Rabat - Several Moroccan regions will witness heavy rainstorms with strong winds on Monday and Tuesday, according to the National Meteorological Directorate.The same source said that the northern region, particularly Nador, Driouch and Al Hoceima will witness heavy rain that may reach 150 mm in the next 48 hours. 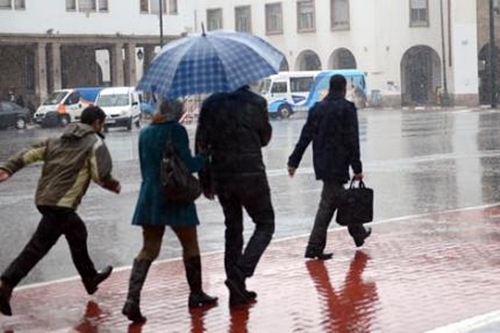 Rabat – Several Moroccan regions will witness heavy rainstorms with strong winds on Monday and Tuesday, according to the National Meteorological Directorate.

The same source said that the northern region, particularly Nador, Driouch and Al Hoceima will witness heavy rain that may reach 150 mm in the next 48 hours.

Up to 40 and 60 mm of rain is also expected in Agadir, Essaouira, Safi, Taroudant, Ait Baha-Chtouka, Chichester, Taza, Sefrou and Boulemane during the same period.

The same source stated that the rainfall is likely to exceed 80 mm in Agadir and Taroudant.

The Directorate also expect the rainfall to reach 40 and 60 mm in the regions of Taza Berkane, Oujda, Fnid’q, Mdi’q, Chefchaouen and Fahs Anjra.

“Moderate” rains are expected in the afternoon of October 19 in Larache, Asilah, Tetouan, El Jadida and “probably” in Casablanca.

Strong winds of up to 70 km / h are expected in El Jadida and Safi during the next two days.

as a result of the rainfall, several regions of the Kingdom will witness a significant decrease in temperature.

The National Meteorological Directorate called on people and road users to be more cautious.

Last November, heavy showers in the south, particularly in Sidi Ifni and Guelmim, had caused devastating floods, which claimed the life of more than thirty people and destroyed infrastructure.