Fez - Morocco's Minister of Foreign Affairs and Cooperation Salaheddine Mezouar called, Tuesday in Fez, for an Arab-Islamic roadmap to compel Israel to stop its repeated aggressions against the Palestinians and Al-Quds. 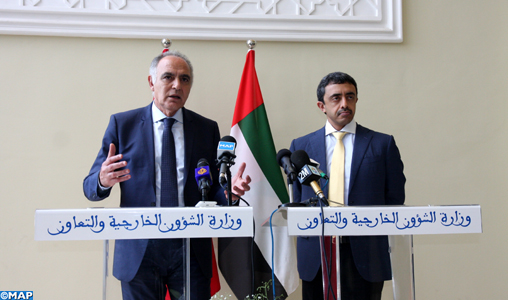 Fez – Morocco’s Minister of Foreign Affairs and Cooperation Salaheddine Mezouar called, Tuesday in Fez, for an Arab-Islamic roadmap to compel Israel to stop its repeated aggressions against the Palestinians and Al-Quds.

“This approach (roadmap) would exert pressure on the international community to step in and compel Israel to halt its aggression against the Palestinians and Al-Quds,” the minister said at a joint press conference with his UAE peer Sheikh Abdullah bin Zayed Al Nahyan.

He stressed that the two heads of State, King Mohammed VI, Chairman of Al-Quds Committee, and Sheikh Khalifa bin Zayed Al Nahyan, UAE President, put the Palestinian question and defense of the holy city at the top of the priorities of both countries so as to put an end to the repeated aggressions of Israeli occupation forces.

The minister said that all-out efforts made by the two countries have managed to revive the Palestinian issue, noting that Arab-Islamic mobilization would contribute to stop these aggressions.
For his part, the UAE Minister praised the role of Al-Quds Committee, chaired by HM King Mohammed VI, and Bayt Mal Al-Qods, in protecting the holy city and its population.

“The Palestinian issue and Al-Quds are a priority for the United Arab Emirates and Morocco”, he stressed.

Sheikh Abdullah bin Zayed Al Nahyan also underlined that the two leaders “follow closely all developments on this issue in view of the impacts of any aggression against Al-Quds on all Arabs and Muslims”.