Istanbul - Recently, the Odense Zoo in Denmark conducted another one of their animal dissecting rituals open to public. A young male lion that was put to sleep in February and kept in freezer, was dissected in front of a vast audience that included children as well. 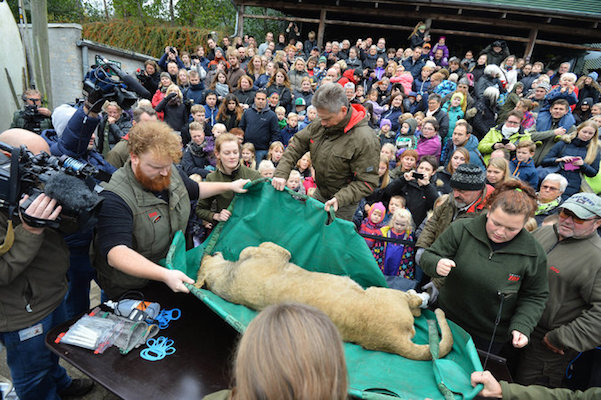 Istanbul – Recently, the Odense Zoo in Denmark conducted another one of their animal dissecting rituals open to public. A young male lion that was put to sleep in February and kept in freezer, was dissected in front of a vast audience that included children as well.

As you might recall, last year, 18 months old sweet giraffe Marius was killed and similarly dissected in another zoo in Denmark in front of the eyes of the public and children in the country. Worldwide protests, the attempts of animal rights’ organizations could not prevent the slaughtering of this piteous animal.

Both of these healthy and young animals were slaughtered on the grounds that there were surplus in the zoo and that the administration of the zoo wanted to prevent inbreeding. Actually applying birth control methods (like it is generally done in the USA) or sending these surplus animals to other countries that might be willing to accept them could have easily solved this problem. However, without even considering the suggested solutions, these cute, innocent animals have been slaughtered unwaveringly and been made the subjects of horrifying dissecting sessions that almost became traditional in Denmark.

Of course one might argue that in a world in which tens of thousands of people lose their lives everyday, many subjected to torture and persecution, and again many living beings die everyday with various reasons, the death of a few of wild animal is insignificant.

However what rightfully disturbs the global public opinion that reacted to these slaughters, is beyond the horrifying appearance of that cold, ruthless, materialist mindset behind these massacres; the corpses of these animals were dissected in a public setting, before the eyes of many children and a show was made out of it.

The fact that the Odense Zoo specifically scheduled this exhibition during the autumn recess, to make it possible for more children to witness this “show” sparked off a serious reaction in the public. However, the executives of the zoo and some scientists in the country who gave coldblooded statements upon these reactions regarded this incident as reasonable, natural and useful.

One of the biologists of the zoo, Nina Czollatz Christensen stated that they’ve been doing this for 20 years and that children showed great interest to these dissections.

One of the authors of “The Danish Way of Parenting” Jessica Alexander, acknowledged these animal slaughtering shows to be reasonable saying; “Danish parents tend to be very honest with their children about life and death – the good, the bad and the ugly,”

As can be seen, these statements reveal a far serious sociological and psychological dimension of these incidents far beyond the slaughtering of a few animals: a mindset and a practice threatening the healthy mental development of small children still in primary school, is attempted to be systematically infused into the society.

Actually, it is a well-known fact that such publically conducted animal dissections under the name of “scientific education”, are practices direfully open to cause permanent psychological damages in children encouraged to watch them.

Indeed, even in movies shown on televisions or in theaters, there are globally adopted rating systems designated to classify them with regard to suitability in terms of their content and age group of the target audience. A warning is made before the films that contain negative behavior, violence, horror, sexuality, to prevent the viewing of an audience under the age of 7, 13, and 18 according to the rating of the negative content. All these ratings are aimed to protect underage children and the new generations from psychological traumas and to enable their healthy mental development.

Bringing an animal they already know to be sweet, healthy and lively, as a corpse and dissecting its organs in a public setting is in conflict with every psychological protection rating.

Besides, the statements of the authorities of the said zoo stating that the children are very happy to view this dissection do not reflect the truth.

It is apparent that the approach of those who try to degrade this incident as a useful biology education and a life lesson is philosophical more than scientific. That philosophy is none other that the materialist philosophy which claims that all living beings come into being as a result of mere coincidences, that life is a function of matter and that all living beings will be vanished after death.

Actually the master race nonsense of the time of Hitler and the inhumane Eugenics policies that demanded the annihilation of those regarded as inferior races and the sick, crippled, unhealthy and disabled individuals claiming that they will cause degeneration were all the by-products of the same materialist philosophy.

That is why, urgently abandoning this brutal and ruthless materialistic understanding that become widespread, as a serious social threat both for Denmark and other Scandinavian countries and the Western world, is a must. In order to raise a healthy, balanced generation with humane characteristics and moral values, it is crucial to base children’s education and personality development on love, compassion, mercy, and most importantly spirituality, not on violence and massacres.

There are innumerable scientific works for children to learn biology. In their education concerning biology, there is absolutely no need for terrifying, violent, brutal methods such as dissecting beautiful animals before their eyes that would disturb the mental balance of even adults.   Showing them a brutal way of death without giving them any information about afterlife may very likely cause great traumas in their lives in the upcoming years and cause cruel generations to rise.

The greatest and the most accurate lesson children should take from animals is the innumerable wisdom and the facts leading to faith revealed in the perfection of their creation, their beauty, their sweetness in their lives and behaviors.