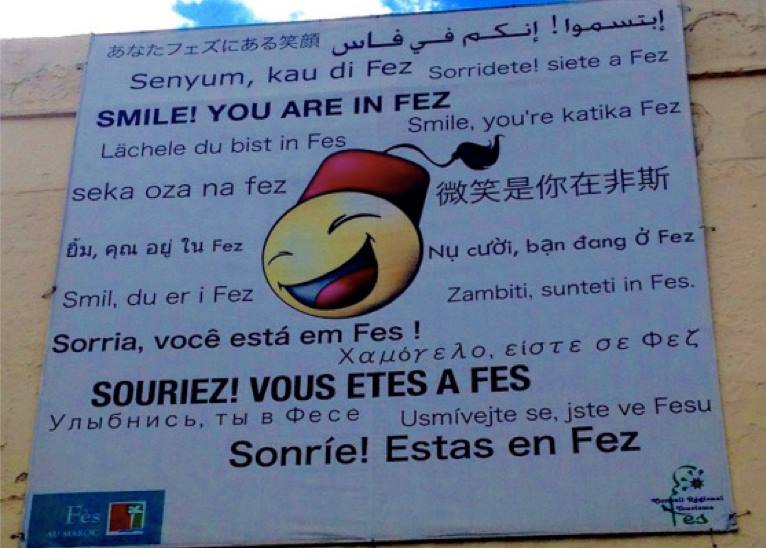 Essaouira – We were new to Essaouira and Ambassador Bush was passing through town. When paths cross, the Ambassador and other Embassy personal make it a point to meet with Peace Corps Volunteers and we were happy to meet for breakfast. We talked a bit about our impressions of Morocco on the whole. At the time, my wife Olivia and I had a lot less experience in Morocco and, therefore, we took our lead from the more experienced volunteers. At some point in the conversation Ambassador Bush asked, and I’m paraphrasing, where are the Moroccan students in relation to American students, you think?

The response that the elder volunteer gave stuck with me, “well, it depends, most of these kids know at least three languages.” Think about that.

Before the age of thirteen, most Moroccan youth are introduced to at least three languages and if the person is of Amazigh descent, the odds are it is four. Pretty impressive, especially as I find myself floundering through what is merely my second (really more like my 1.5th language if I am going to be accurate).

Back home, if you have decent command of just one second language you are at least what LinkedIn might say, more employable. If you had three, or four? LinkedIn would hardly know what to do with you. Maybe put you on Buzzfeed along with that guy who knows nine languages.

Morocco welcomes tourists from all over the world. Many Moroccans who do business with tourists learn languages from interactions with customers.

I take nothing away from the man’s language skills, nine languages fluently, but watching the Internet light up only drives home how far removed we, in the U.S., are from the rest of the world. Our geographic isolation, our mass cultural diaspora, and a good helping of British (and later American) Imperialism makes us rather uniquely positioned in the world to know only one language. English has become the language of international trade and business, and the “need” for another language is shrinking by the day.

I don’t fault Americans for not knowing more languages. I don’t think it is a reflection on character or intelligence. I do think we miss out on a lot of positives that come from building that particular brain power. The strengthening of that part of the brain when you learn and speak another language brings along benefits beyond simple communication. However, it isn’t that an American born today can’t learn more than just English, but it is the product of a lack in necessity. The vast majority just won’t have to.

If my Language Teacher, Abderrahmane, whose first language is Tamazight hadn’t left the countryside because his father needed work, he wouldn’t have learned to speak Darija (Moroccan Arabic). If he didn’t need to understand the Quran or study science in school, he wouldn’t have learned Fusha (or Modern Standard Arabic, the language that is the baseline for Arabic dialects). If French didn’t still dominate business and government administration in Morocco, he wouldn’t have been taught French since middle school. Then, without all of these, he probably wouldn’t have been in the position he was to pick up English so effectively, see his passion for it and study it in University. Without University, he would not have earned the job as our Language and Cultural Facilitator, which only reinforced his language skills with necessary practice.

Add into the mix, a technology boom, where youth have cell phones and text in Darija using the cell phone’s stock Latin Alphabet not with Arabic script. So in order to indicate letters in Arabic not found in English or French they use numbers; creating a whole new alphabet and language in itself (talk about a generation gap).

Over a year and a half in and this still boggles my mind. This is because my mind, as a product of my American upbringing, is rather obsessed with efficiency. The right way for me (and a lot of people I would suspect) is often the most efficient way—the clearest, easiest, and quickest possible path from point A to point B, right? This is most certainly a product of an American mentality, but just because I recognize I am using this specific lens that doesn’t mean I can dismiss it. I think constantly about the confusing state of languages and the murk it must stir up, especially in the early years of education.

Language is as fundamental as it gets. It is our basic block from which we build our capacity to learn and digest new information. What an overload this must be, to learn a language just so you can learn a subject. Is there a better way?

But here is where I must step back.

The system, most assuredly, is inefficient. Moroccans definitely have to spend an exhausting amount of time on language, which, when time is finite, inevitably takes away from other pieces of education. It saddens me to see it, because what pieces of education get cut first when time is limited? When priorities must be made and things must be cut, what do we lose? We lose those things that I have always valued most, like creativity, or self-expression, or critical thinking and analysis. Or even just the ability to read and write the languages they know how to speak. However, when I’m lost in the maze, critiquing the language situation Morocco is immersed I always come to this, huh, easy for you to say? Why do you get to say anything?

Why do I get to think like this? Why do I get to analyze their system, their struggles? The unsettling truth is that it is my American Privilege that lets me think these things. By being born where I was, I grew up speaking the only language I have ever truly needed and this gave me an unquantifiable amount of opportunities. This has given me not only worldly opportunities, but academic opportunities that my Moroccan counterpart would need years of study and mountains of time just to break even.

For a small example, before a Moroccan can dive into literature he/she must first learn Fusha because Darija, much less Tamazight, has never been written. And in contrast, my mother was able to read me stories from the very beginning because the language I spoke is the language she spoke and that was the same language with which the stories were written. This is an advantage. This is a privilege and so fundamental it is easy to forget.

My second reason, however, is a little more personal. It is my expression of gratitude for having been given an opportunity to learn about language on this level. Olivia, myself, and a lot of Peace Corps Volunteers around the world, are learning irreplaceable lessons on language (not merely Darija) that would be extremely difficult to understand without seeing first hand. Learning Darija has been a struggle for us both, but we are all the better for it. Not because our Darija will be a staple in our lives forever, but because of the perspective it has given us upon our own language and our own privilege. By learning through necessity we get to see, even if just slightly, from where so much of the world approaches.

Olivia likes to talk about how humbling it was, and still is, being submerged into a world where we could not communicate. To go from a big old college degree to being in all practical senses, a child—from an independent, self-reliant adult, to needing help ordering coffee. The sobering experience of confusion and misunderstanding, of not knowing, that comes from learning this language, this way, will be a piece of this experience with the greatest longevity. The unbelievable patience that we have received here from people trying to help, to coax us along, will be with us long after I have forgotten how to say, ma-fhhm-sh, I don’t understand.