Rabat - Thousands of Moroccans gathered in a Pro-Palestine march in Casablanca on Sunday. 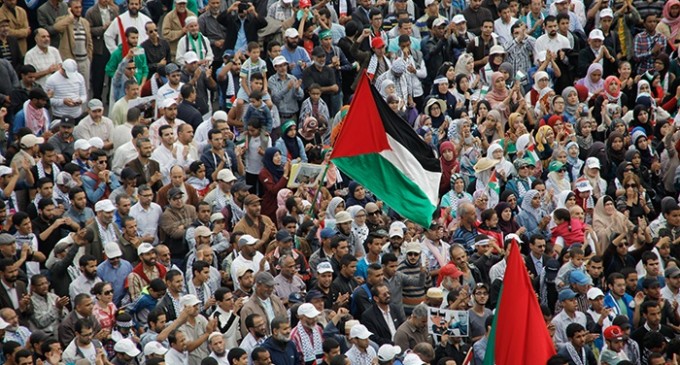 Rabat – Thousands of Moroccans gathered in a Pro-Palestine march in Casablanca on Sunday.

Besides the banned Islamist group, the march included members of Moroccan political parties such as the Party Justice and Development (PJD), the Uniqueness and Reform Movement (MUR), the Authenticity and Modernity Party (PAM), and the Socialist Union of Popular Forces (USFP).

Leaving behind their political differences, Moroccan leaders and their fellow citizens came together as one for the Palestinian cause.

“When it comes to the Palestinian cause, there is no political label. This is the second cause of the Moroccan people after the one of territorial unity. When it comes to Palestine, we are all brothers and sisters,” PAM’s National Secretary of Youth, Najwa Koukouss said according to Telquel.

Among banners and Palestinian flags, Moroccans marched down the streets of Casablanca chanting Pro-Palestine slogans such as: “With soul and blood we will defend you Al Aqsa”, “Palestine Free Land”, “Zionists Get Out”, “From Morocco to Palestine, One and Not Two Peoples”.

Others were dressed in green shirts representing their anti-Israel sentiment, while some children were carrying plastic guns in defense of the Palestinian minors that have been brutally murdered in the Israel-Palestine violence attacks.

According to AFP, violence between Israeli forces and Palestinians has escalated since the beginning of October 1, costing the lives of 54 Palestinians and 8 Israelis.