New York - According to Germany’s newspaper Deutsche Welle, around 10,000 counter-protestors gathered on Sunday in a protest against an anti-Islam rally of merely 1,000 supporters in Cologne, Germany. 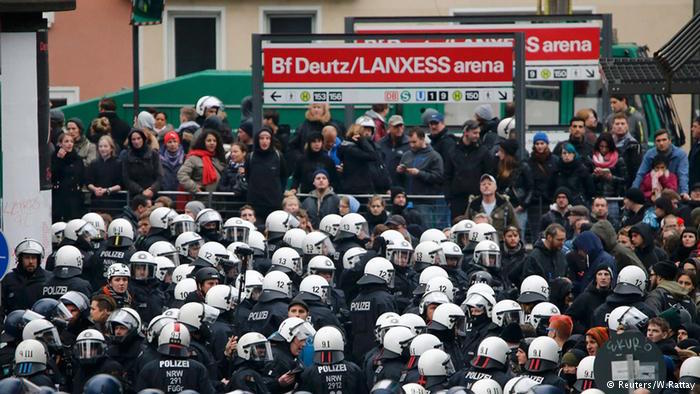 New York – According to Germany’s newspaper Deutsche Welle, around 10,000 counter-protestors gathered on Sunday in a protest against an anti-Islam rally of merely 1,000 supporters in Cologne, Germany.

The anti-Islam group Hooligans Against Salafists (HoGeSa), which was joined by the “anti-Islamization movement” PEGIDA, garnered only 1,000 supporters who were outnumbered 10 times by a counter-demonstration.

Nearly 3,500 police officers barricaded the two opposing groups at the Deutz train station where the protest took place on opposite sides of the train tracks.

The 10,000 protestors, according to the same source, included far-left activists and politicians, as well as civil society groups and German citizens carrying banners that read: “No person is illegal” and “Refugees welcome.”

Although local authorities expected serious clashes between protestors, the rally witnessed a small number of violent attacks, which resulted in arrests and a few injuries.

Amidst the recent refugee crisis that has brought thousands of refugees to Europe, Germany has proven to be one of the most welcoming countries within the European Union.

The country is expected to host nearly one million refugees from the Middle East, mainly from Syria by the end of 2015.

The city of Cologne has a new mayor, Henriette Reker, who was attacked and stabbed in the neck on October 17 at an outdoor market by a man who condemned her pro-refugee views.