New York - Morocco is participating in the India-Africa Forum Summit currently underway in New Delhi, from October 26-29, where more than 50 leaders of African countries have gathered to expand cooperation between India and Africa. 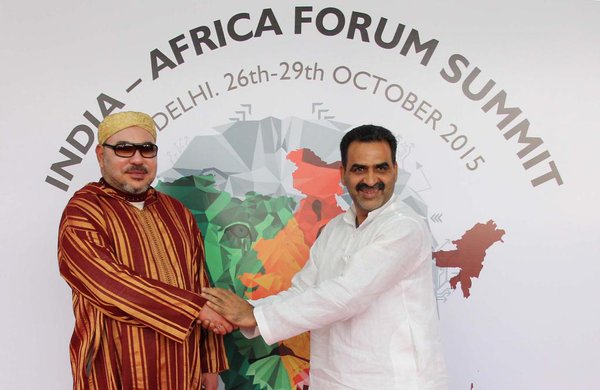 New York – Morocco is participating in the India-Africa Forum Summit currently underway in New Delhi, from October 26-29, where more than 50 leaders of African countries have gathered to expand cooperation between India and Africa.

Morocco’s top economic position in the African continent and its ties with the rest of the world is thought to benefit and strengthen India’s position at the international level.

According to Indian media, India seeks to explore new ways to expand in energy and infrastructure, as well as innovation and technology, where Morocco ranks second in Africa.

The North African nation is heavily reliant on its natural resources and well-suited to play a mediator role between India and Africa.

Morocco is the world’s top producer of phosphates with the Office Chérifien des Phosphates (OCP), the largest phosphate company in the world, accounting for more than a third of Morocco’s exports.

India is in need of fertilizers, and Morocco is well positioned to export them into Asia, since phosphates are used to make a variety of fertilizers, pesticides, and animal feeds.

Recently, more than 100 international giants have chosen Morocco as the place to open their African plants and franchises. Several of the most prominent global corporations are taking advantage of Morocco’s strategic geographical location.

The World Economic Forum (WEF) ranked Morocco’s economy as the “most competitive economy in North Africa.”

Morocco’s global trade ranks above the global trade average in a region where exports have slowed down, if not ceased.

According to the latest economic reports, the North African nation has solid plans to double if not triple its success in the aviation and automotive industry, and to switch to a green economy within the next 15 years.

Morocco is also ranked second best in infrastructure among African countries, making it an ideal place for Indian investors to open their businesses and benefit from its location at a crossroads between Europe, Asia, Africa and the American continent.

The city of Casablanca was recently ranked as the second financial hub in Africa and business parks are launching new construction phases to accommodate Morocco’s fast industrial growth.

If India consolidates its ties with Morocco by setting the stage at the upcoming summit, the North African nation could offer the ideal relationship as the go-between for India and “Francophone Africa,” as well as other European countries.