New Delhi - The Moroccan Firms General Confederation (CGEM) and the Federation of Indian Chambers of Commerce and Industry (FICCI) signed, here Monday, a memorandum of understanding to boost trade relations between the two countries. 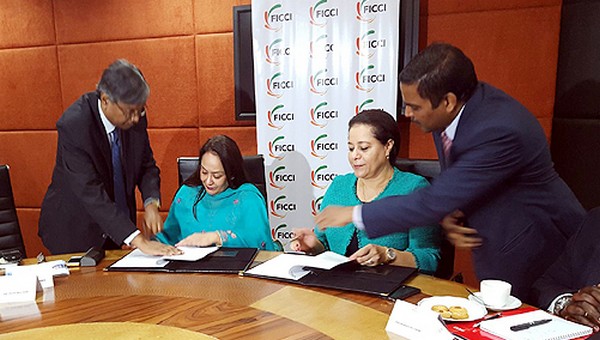 New Delhi – The Moroccan Firms General Confederation (CGEM) and the Federation of Indian Chambers of Commerce and Industry (FICCI) signed, here Monday, a memorandum of understanding to boost trade relations between the two countries.

Signed by CGEM’s chairwoman Miriem Bensaleh Chaqroun and FICCI president Jyotsna Suri, on the sidelines of the Third India Africa Forum Summit 2015, the document is meant to reinforce trade between the two countries through deepening economic and commercial cooperation and promoting investment.

Both parties undertake, according to the memorandum signed under the supervision of the Moroccan Centre for Export Promotion (Maroc-Export), to boost trade missions and information exchange to promote the business climate between the two countries and increase exports.

The memorandum aims to establish a platform for exchange between India and Morocco in the areas of investment, industry and tourism, Jyotsna Suri told the press, noting that this agreement is an important milestone in bilateral relations.

For her part, Miriem Bensaleh Cheqroun stressed that this agreement will provide a basis for cooperation defining a number of areas that interest the private sector of both countries, expressing the wish to see Morocco, which has become a privileged gateway to Africa, give through this partnership a new impetus to relations between Morocco and Asia.