New Delhi - King Mohammed VI expressed "appreciation" for India's "constructive" position on the Western Sahara issue and support to the UN process to resolve this conflict."I should like to express our appreciation for the Republic of India’s constructive position concerning the Moroccan Sahara issue and for supporting the UN process to resolve this artificial conflict", said the Sovereign on Thursday at the opening of the third India-Africa forum summit in New Delhi. 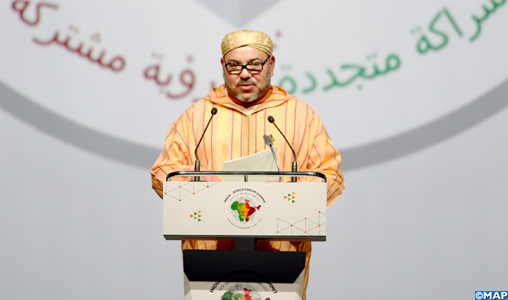 New Delhi – King Mohammed VI expressed “appreciation” for India’s “constructive” position on the Western Sahara issue and support to the UN process to resolve this conflict.

“I should like to express our appreciation for the Republic of India’s constructive position concerning the Moroccan Sahara issue and for supporting the UN process to resolve this artificial conflict”, said the Sovereign on Thursday at the opening of the third India-Africa forum summit in New Delhi.

The King regretted, on the other hand, “that some countries have been unable to move forward; they continue repeating obsolete discourses and theses that date back more than 40 years.”

The Sovereign also expressed admiration for India’s “pioneering development model” that has enabled it to become one the emerging global powers, noting that this evolution makes “India’s ambition to play a key role within UN agencies in charge of global peace and security all the more legitimate.”

King Mohammed VI further lauded India’s “balanced, responsible foreign policy based on respect for international legitimacy and for the territorial integrity of states, as well as on the defense of developing countries’ interests and just causes.”

The Moroccan monarch praised Morocco-India “outstanding relations” dating back to the time of “His Majesty King Mohammed V – may he rest in peace – and of the great leader Jawaharlal Nehru, who were both engaged in the struggle for the liberation and independence of African States.”

The King praised the partnership between the two countries in the field of phosphates, and voiced Morocco’s resolve to expand prospects for bilateral cooperation, particularly in such sectors as agriculture, the pharmaceutical industry, research in science and technology and the training of managerial staff, making sure we build on that experience to serve African peoples.

“An example of fruitful partnership between our two countries is our cooperation in the field of phosphates and their derivatives, which we seek to expand to include food security programs, putting our know-how at the disposal of some African countries,” he said.