Rabat - A young Moroccan woman suffering from cancer gave birth to four healthy babies on Saturday at the Inezgane Hospital in the Agadir region. 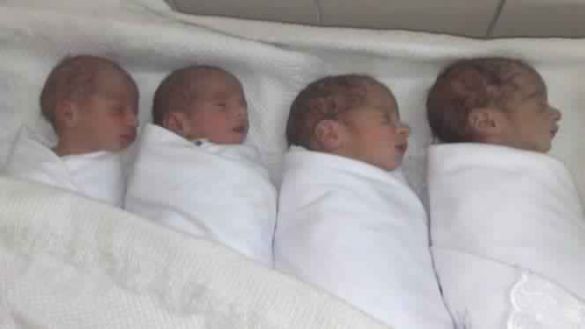 Rabat – A young Moroccan woman suffering from cancer gave birth to four healthy babies on Saturday at the Inezgane Hospital in the Agadir region.

The 33-year-old woman was confronted with her cancer diagnosis when doctors discovered a tumor in her body while performing regular pregnancy tests, according to Le360 news website.

Faced with the bliss of pregnancy and the hardship of such illness, she had to make the challenging decision of undergoing cancer treatment and not allowing a forced childbirth.

Since chemotherapy and other cancer treatments cannot be performed in the first trimester of pregnancy, the woman from Inzegane had to wait for more testing to submit herself to treatment until she was considered medically safe.

According to the same source, the future mother of four, attended the Lalla Salma Cancer Center for chemotherapy and pulled through its strong side effects with courage, until Saturday when she gave birth to her quadruplets.

All four babies were born in good health and the mother is under observation, the hospital staff indicated.

The father of the quadruplets is joyous for the miraculous addition to his family, although his wife is still suffering from cancer and in need of further treatment and medical attention.

He appealed to the help of those who can provide for his wife’s recovery and family, since his income is “very limited”, the report noted.