Rabat - Thousands of Moroccans in the city of Tangier, in northern Morocco, gathered on the streets in a large-scale protest on Saturday evening to denounce the high prices being charged for utilities in the city and neighboring areas. 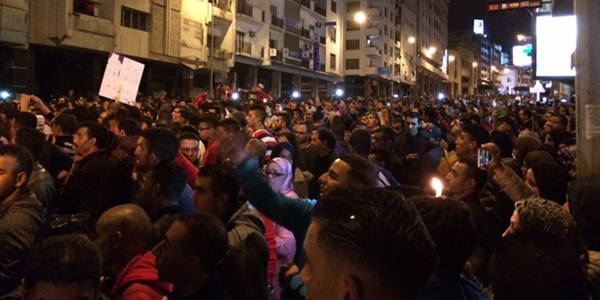 Rabat – Thousands of Moroccans in the city of Tangier, in northern Morocco, gathered on the streets in a large-scale protest on Saturday evening to denounce the high prices being charged for utilities in the city and neighboring areas.

Tangier residents have been protesting against the hike in water and electricity charges for the last two weeks through several smaller demonstrations that led to Saturday’s manifestation, according to eyewitnesses cited by Reuters.

Amendis, a branch of the French Veolia Environmental Services, is the utility company that has been servicing Tangier and Tetouan since 2002, has come under fire and is being accused of “high prices and administrative mismanagement” by the cities’ residents.

“Amendis go home, Tangier is not yours,” protesters chanted in downtown Tangier Saturday night, while hundreds of security forces were sent to appease the demonstration, the same source noted.

“Enough is enough. We have been protesting for years now against that company,” Mohamed Tadlaoui one of the protest’s organizers stressed.

“Now it is time for them to leave, and a public company should take over,” he added condemning Amendis’ alleged inflated water, wastewater and electricity prices.

According to the Ministry of the Interior, Tangier’s city council and Amendis’ officials, there is a new committee that will begin to review some of the bills in question and correct any possible errors, including double billing.

Meanwhile, Amendis has defended itself pointing out that demand for utilities in the summer is higher than any other time of the year.

The company also claimed that “the government is to blame” for increasing the prices of services of the state-run power utility ONEE in 2014, which has forced them to increase theirs as well.

“The new structure started in September 2014, but people in Tangier felt it just during the last summer when consumption soars,” Amendis operational manager, Chouhaid Naser said to the same source.