New York - American supermarket chain, Walmart, has done it again and offered for sale a latex prosthetic nose as a Halloween costume allegedly mocking the facial features of Arabs. 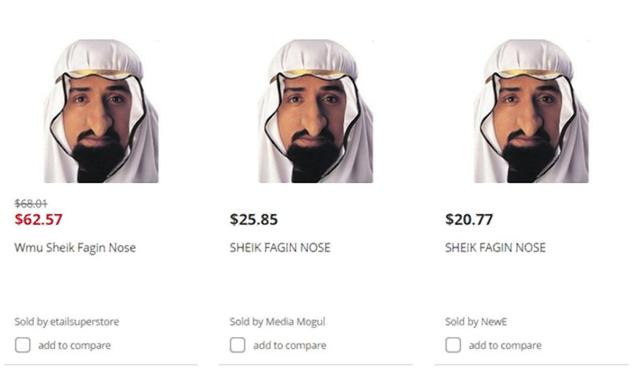 New York – American supermarket chain, Walmart, has done it again and offered for sale a latex prosthetic nose as a Halloween costume allegedly mocking the facial features of Arabs.

The face mask named “Sheikh Fagin nose” was being offered for $9.52, and described as “perfect for an Arab Sheik” allegedly designed after the villain in Charles Dickens’ novel “Oliver Twist,” according to US Fox News website.

The sale of the Arab nose also caused uproar among social media who quickly condemned it pushed Walmart to pull off the shelves.

Although Walmart removed the controversial item from their inventory, the latex nose can be purchased online through other makeup effects retailers, under the same name.

According to the BBC, the company that manufactures the noses said they would “definitely discontinue it.”

“These images do nothing but perpetuate racist tropes that have long been used to demonize, otherize and alienate Arab communities throughout history,” the committee’s President said.

This is not the first time Walmart sells a Halloween costume that is considered offensive to a community. Last year, the American supermarket offered an outfit similar to late Al-Qaeda leader Osama bin Laden.