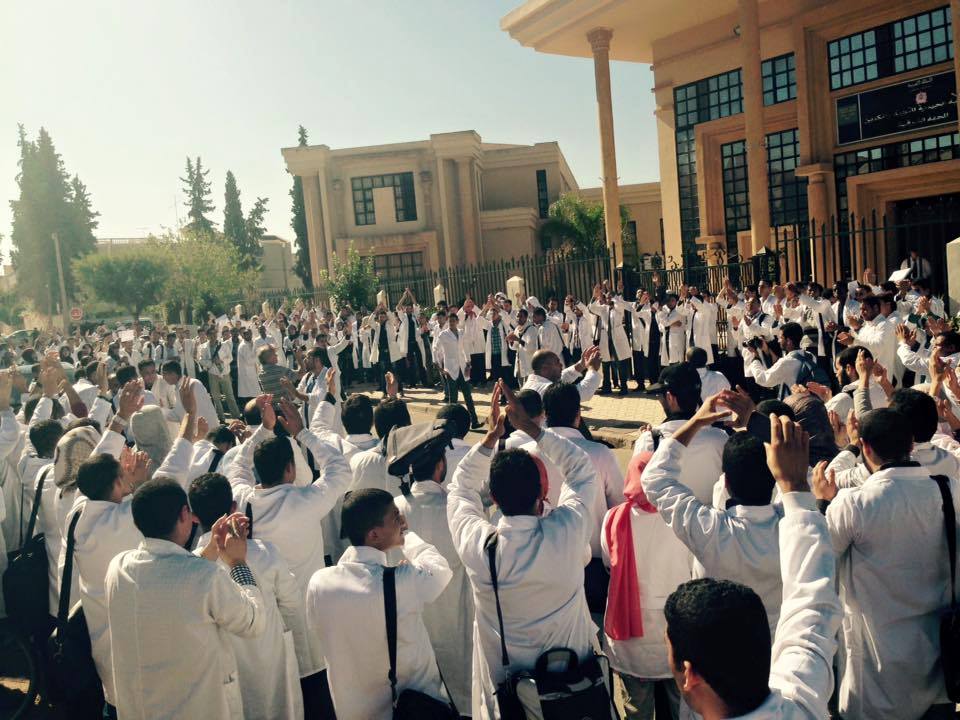 Oujda – If there is one thing that unites the masses of Moroccan graduates of all spectrums, it is perhaps their common culture of protest and boycotting, which has robustly declared itself to be inherent of our common culture. After the tremendous stir set off by medical students who collectively and systematically rebuffed the latest decisions issued by the Ministry of Health, the plague of demonstrations has also affected the regional centers for education and training nationwide. Teacher trainees are now boycotting training in almost twenty-four training centers all over Morocco, and they are mobilizing at the grassroots level to take serious initiatives regarding their blurred future, particularly after the two nascent governmental decrees N: 588-15-2 and N: 589-15-2.

The second governmental decree has far worse consequences and threatens to generate many unemployed teachers. This decree stipulates that training be separated from recruitment, and that at the end of the one-year-long training program, the teacher trainees will have to sit for another exam (a recruitment test) in order to be officially hired. To further aggravate matters, the 10,000 current teacher trainees across Morocco will have to compete for roughly 7,000 teaching positions according to the Ministry of Finance, leaving 3,000 unemployed with an “unworkable” diploma.

In fact, the two Decrees are nothing but a genuine reflection of the disgraceful educational status quo and the paralyzed educational system, which apparently still stumbles over a myriad problems and challenges that are yet to be resolved. The Ministry of Education is adding inconsistently specious decisions to the already stagnant education system rather than reforming education, as they want us to believe. By doing this, they only heighten its deficiency and add more fuel to the fire.

That said, teacher trainees across the country have begun to boycott training both in its theoretical and practical aspects, and say that boycotting (and nonviolent marching) is but the tip of the iceberg, and only the first stage before moving toward more advanced and serious forms of struggle. Interestingly enough, the legitimate cause of teacher trainees has succeeded in receiving unlimited support from many teachers’ unions, as well as youth and students organizations. This is simply because the two decrees are first and foremost detrimental not only to teacher trainees but also to all the components of the educational sector. In the same vein, and evoking the Foucauldian quote “Knowledge is power”, one can be of the opinion that all these systematic attacks on the entire educational equation – teachers, trainee teachers, and students – is undoubtedly a part of a political and ideological project that aims to subjugate teachers, belittling their role and influence in society and cutting education at its knees.

In a nutshell, there is something terribly wrong with this country, and everything seems like a horrifically endless nightmare that continues to haunt us day and night. Nevertheless, teacher trainees are in mutual agreement that it is high time to stand up for their rights and shout “No” in the face of our officials and their blithe decisions. Our officials need to know that teacher trainees are no longer the weakest circle, and that they are now in the position of power, and as such they object to being treated as scapegoats in the hands of the government and the Ministry to be sacrificed whenever they feel like it. The Ministry of Education must understand that until it retracts its two Damned Decrees and desists from its frivolous decision making and psychological attacks (El-Hogra) on teachers and students, the struggle will persist, and teacher trainees will continue to boycott and march in the streets.