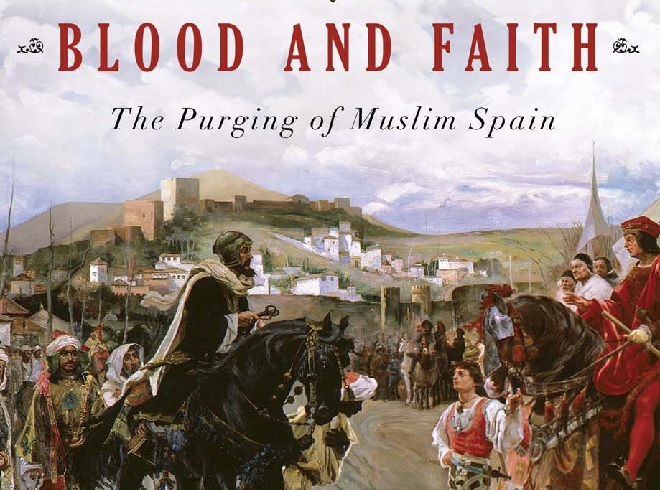 Moriscos are Muslims who were forced to convert to Catholicism or be killed or expelled from Spain in the early 1500s. Three generations later, in 1609, they were expelled from Spain because, like Spain’s Jews who were forced to convert, they remained true to their religion in secret. The Moriscos, like the Sephardic Jews, were scattered across North Africa.

The last week of October 2015 marked the beginning of Lisbon’s bestowing Portuguese citizenship upon the descendants of Sephardic Jews who were persecuted and exiled from Portugal some 520 years ago.

In neighboring Spain, in the four weeks since October 2, 4,302 people have begun the slow bureaucratic process of gaining Spanish citizenship based on laws similar to the Portuguese laws, which were passed as a way of making amends for historical crimes committed during the Inquisition.

According to genetic studies, 20 to 25 percent of Portuguese people alive today have Sephardic Jewish ancestry. Furthermore, tens of millions of Latinos and Hispanics in North and South America and Europe are also descended from Portuguese and Spanish Jewish exiles.

In 1391 there were anti-Jewish riots in several Spanish cities. Thousands of Jews were forcibly baptized. The Church viewed these baptisms as valid because the Spanish Jews had freely chosen baptism over death, unlike the Jews of France and Germany during the first and second crusades, who chose to kill themselves rather than be baptized.

Over the next three generations there were additional riots that led to more forcible baptisms.

Jews forced into Christianity didn’t stop believing in Judaism, but they had to practice their religion and teach their children in secret. The Catholic church knew this but they thought that all the children and grandchildren of the Marranos (as the secret Jews were called) would be indoctrinated into the “true faith” and become believers. This did not happen.

As such, in 1480 the Holy Inquisition began holding trials in Spain. Over the next two centuries, tens of thousands would be tried, tortured, imprisoned, and sometimes executed. In 1492 all unbaptized Jews in Spain were exiled. Over 100,000 Jews left Spain, and most of them went to Portugal.

In 1497, they were expelled from Portugal. But first, all their children were forcibly baptized, so parents who didn’t want to lose their children had to freely choose baptism.

Decades later, many secret Jews and their children, found freedom in the new world. When the Inquisition was established in Lima (1570) and in Mexico City (1571), secret Jews fled to other parts of Central and South America to escape.

Like the Marrano Jews who secretly held on to Jewish religious rites and to a Judeo-Spanish language called Ladino, most of the Moriscos, including those who had been coerced into becoming baptized, retained an awareness of and a connection to their Muslim ancestry.

When they were expelled between 1609 and 1614, most Moriscos settled in North Africa and returned to the religion of their forefathers. Like most Sephardic Jews, the descendants of Moriscos, especially in Rabat, Fez, Sale and Tetouan, married only within their community, and most continue to do so to this day.

Recently, more Morisco descendants are rediscovering their Iberian heritage. “We think we deserve some respect for the suffering Moriscos experienced,” said Najib Loubaris, president of the Association for Andalusian Remembrance.

Loubaris is one of those who became aware of his Morisco roots late in life, thanks in part to an abundance of books that have been published on the subject. His surname is a version of Olivares, a Spanish town near Seville.  After their expulsion from Spain, his ancestors were among those who founded the city of Sale, Rabat’s twin city where they sought retribution against Christendom by engaging in piracy.

“My sister explored our family heritage and discovered we were descendants of Ibrahim Bin Loubaris, a pirate who fought against the Americans in the Barbary Wars,” he said.

A few years ago, Loubaris formed an association with others that he said counts hundreds of members in Rabat, Tetouan, Marrakech, Fez and other Moroccan cities. Loubaris does not know how many Muslims of Spanish ancestry live in Morocco, but says there are some 500 surnames of Morisco origin in the books.

Hassan Aourid, former governor of Meknes and former Historian of the Kingdom e novelist, pointed out the differences between the expulsions of Spanish Jews in 1492 and Muslims in 1609-1614. He said that while Jews were expelled solely for their religious beliefs, Moriscos were also considered a fifth column at a time of Spain’s struggle with the Muslim Ottoman Empire.

Also, the oppressed Moriscos in Spain, who were much more numerous than the Spanish Jews, violently rebelled on two separate occasions.

And while the number of Sephardic Jews seeking citizenship is not expected to be high, there may be millions of Morisco descendants in Tunisia, Algeria, Morocco, and beyond who might apply.

Aourid suggested an alternative way to right the wrongs of expulsion and build bridges between the faiths: Muslims could be allowed to pray at the famed Mosque-Cathedral in Cordoba, originally a Muslim place of worship that was converted to a church.

Of course, in that case the Spanish would have to do the same for all the Jewish tourists who visit the famed Synagogue-Church in Toledo, originally a Jewish place of worship that was converted into a church. Similarly, the Turks should allow Christians to pray at the many Church-Mosques of Istanbul.

This is not a bad idea for symbolic public atonement of past examples of religious intolerance. Our own modern world shows many signs of increased suffering from narrow-minded sectarian conflict.