Rabat - A shocking video footage published this Tuesday shows a group of men throwing a naked woman out of a vehicle onto the pavement of the street in Tangier. 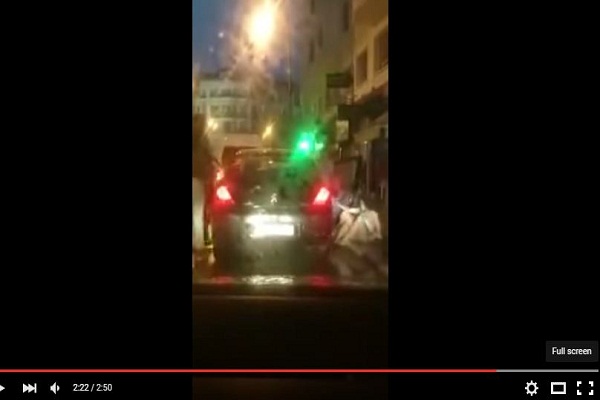 By
Aziz Allilou
-
Aziz Allilou is a student at the Higher Institute of Media and Communications (ISIC) and Morocco World News correspondent in Rabat.
Nov 3, 2015
Spread the love

Rabat – A shocking video footage published this Tuesday shows a group of men throwing a naked woman out of a vehicle onto the pavement of the street in Tangier.

The graphic video shows the car pulling over on one of Tangier’s main streets. The street was almost empty, since the incident reportedly occurred at a late hour of a rainy night this week.

The footage shows a naked woman, who was allegedly forced to leave the car, on the pavement rushing to the vehicle and entering it.

One of them, then, threw a blanket on her naked body, while the driver drove the car away from the scene.  His two partners stayed with the woman on the pavement in order to prevent her from returning to the car.

They walked away as the car departed.  The woman, then, started running aimlessly. The fate of the victim remains unknown as of this writing.

The video footage was shot from another car that was chasing the vehicle in question. The person who shot the video is believed to be an accomplice in the crime, as he/she did not try to intervene to save the woman.