Rabat - Many Moroccan and foreign celebrities showed their love and support for Morocco this November 6 in joyful ways. 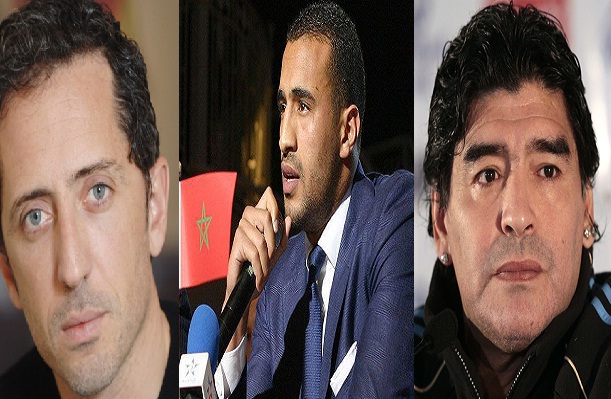 Rabat – Many Moroccan and foreign celebrities showed their love and support for Morocco this November 6 in joyful ways.

The celebrations for the 40th Anniversary of the Green March were not solely observed in Morocco. Millions of Moroccans around the world have demonstrated their solidarity and respect for the country’s epic anniversary.

The power of social media networks has allowed celebrities and other prominent figures in every corner of the globe to share their own ways of commemorating the glorious day when 350,000 unarmed Moroccan volunteers defended their territorial integrity.

Argentine football legend Diego Maradona and many international football stars made their way to Laâyoune to participate in an unforgettable ‘gGala mMatch’ for charity on Friday.

Maradona took it a step further and improvised dance moves with a group of traditional Moroccan musicians and posing next to local star Asmae Lamnawar in Laâyoune.

Morocco’s “Golden Boy” Badr Hari expressed his patriotism by saying “I would die for my country” and choosing to fight his last match in Morocco prior to his announced retirement last week. He was also present in Laâyoune in which a photo next to Maradona wearing “darra3iya” went viral online.

French-Moroccan comedian Gad El Maleh proved he is proud to be Moroccan by adding a layer of the Moroccan flag’s’ image to his profile photo on his personal Facebook page. The photo was liked by over 150,000 people.

Casablanca native rapper Don Bigg announced on his Facebook page that he would be traveling to the Sahara to celebrate the Green March’s anniversary. He posted photos of himself onboard a luxury vehicle, wearing a red baseball cap with the emblem of the Moroccan flag.

The Moroccan diaspora in the US also paid tribute to the 40th Anniversary of the Green March. Several events were organized in Central Florida, New York and Boston.Moroccan-Americans in Central Florida enjoyed a Moroccan Heritage Night at the Orlando Magic NBA game. Amidst performances by Moroccan local artists and the Moroccan flag flying high at the arena . the highlight of the event was a halftime performance by world-renowned Moroccan singer Douzi.

Celebrations will continue throughout November in New York and Boston with more performances by Morocco’s artists, including Douzi, Daoudi, and Asmae Lamnawar.