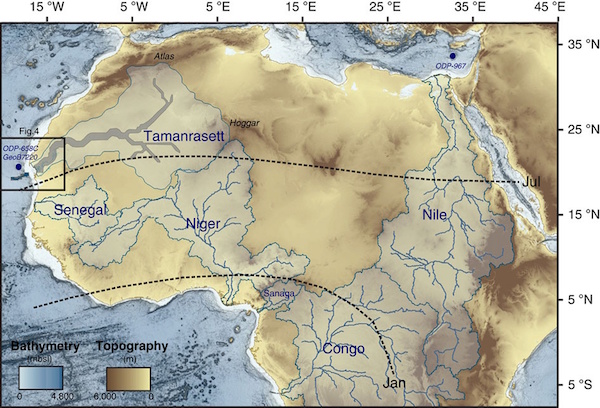 Rabat – A French-led research team has discovered that a vast river network beneath the Sahara that could have carried water to the now-scorched sands of the desert as recently as 5,000 years ago.

This waterway, which flowed under what is now Mauritania, may have formed part of the Tamanrasset River, which is thought to have flowed from sources in the southern Atlas Mountains and Hoggar highlands across parts of the Sahara, The Guardian reported.

According to the article, radar images from a Japanese Earth observation satellite revealed the ancient river system coils at least 500 km inland towards the coast. The riverbed runs almost parallel to Cap Timiris Canyon, a huge underwater canyon that leads off the Mauritanian coast, first mapped in 2003.

“It’s a great geological detective story and it confirms more directly what we had expected. This is more compelling evidence that in the past there was a very big river system feeding into this canyon,” Russel Wynn, one of the researchers to first map the canyon, told The Guardian.

These discoveries show that as recently as a few thousands years ago, the Sahara used to be home to a thriving ecosystem of plants and wildlife. The river also would have carried essential nutrients to marine organisms far out at sea. Were it still flowing today, it would have been the 12thlargest on earth, according to the journal Nature Communications.

“People sometimes can’t get their head around climate change and how quickly it happens. Here’s an example where within just a couple of thousand years, the Sahara went from being wet and humid, with lots of sediment being transported into the canyon, to something that’s arid and dry,” Wynn told The Guardian.