New York - The Virginia Polytechnic Institute and State University (Virginia Tech) in Blacksburg, VA rallied in support of the Muslim community on Tuesday after a series of death threats were found written on a bathroom stall at the university. 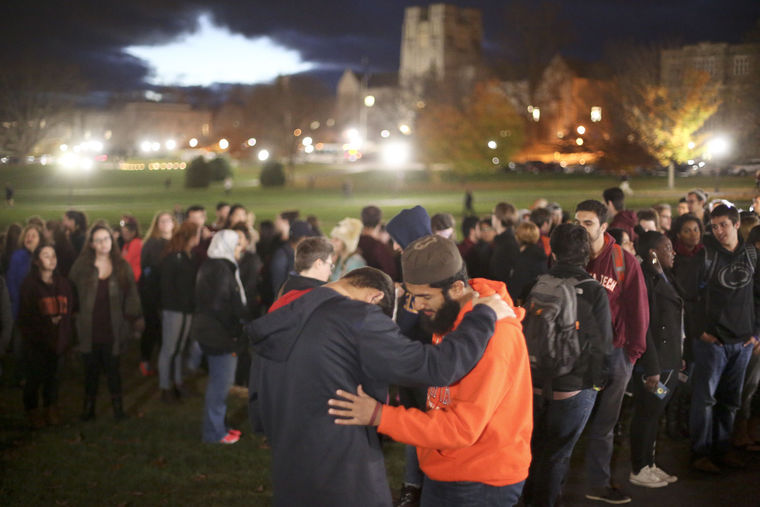 By
Karla Dieseldorff
-
Karla is an award-winning actress and producer.
Nov 11, 2015
Spread the love

New York – The Virginia Polytechnic Institute and State University (Virginia Tech) in Blacksburg, VA rallied in support of the Muslim community on Tuesday after a series of death threats were found written on a bathroom stall at the university.

Thousands of Virginia Tech faculty students and their families gathered at the Drillfield at the request from the Tech’s Muslim Students Association (MSA), according to the US paper Richmond Times.

The “Hokies,” as Virginia Tech students are known, spread the message “Hokies don’t hate” on social media networks with hashtags #HokiesDontHate and #WeStandTogether, as well as during last night’s rally with chants and wristbands to show the school’s anti-racism ideals.

On November 2, local police found an anonymous graffiti message at an academic building saying “I will be here 11/11/2015 to kill all Muslims [sic],” which prompted a campus-wide alert.

“It’s disappointing and frustrating to see this message,” Obaid Rehman, President of the MSA, said. “We want to make something positive come out of it,” he added.

Virginia Tech Police are investigating the case and no further information has been released on the identity of the writer of the threat as of the time of writing.

“The VTPD has not commented upon the credibility of this threat,” Police Chief Kevin Foust, who also attended the rally on Tuesday, said.

“Today’s threat may prove to be a cruel prank, but it is an opportunity to stand with our Muslim friends & colleagues. #StrongTogether,” he tweeted on behalf of the community.

Meanwhile, the MSA President stressed that “there is such a misunderstanding of who Muslims are and what Islam is. It can be disheartening.”

“It’s important that every single one of us make the effort” to say “we will not stand for such a statement,” Rehman added.

According to the same source, the rally was opened with the Muslim salutation in Arabic, “Salam Alykom” (peace be upon you).