Rabat - Morocco’s national team beat Equatorial Guinea by 2-0 on the first leg of the Russia 2018 World Cup qualifiers, which was played on Thursday night in Agadir. 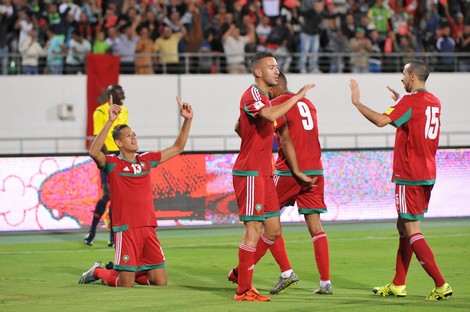 Rabat – Morocco’s national team beat Equatorial Guinea by 2-0 on the first leg of the Russia 2018 World Cup qualifiers, which was played on Thursday night in Agadir.

Moroccan fans had to wait until the 27 minutes to cheer for the Atlas Lions’ first goal, which was scored by Granada’s striker, Youssef El Arabi Following El Arabi’s goal, things looked better for Moroccan players who seemed to control the game.

But this favorable situation did not last for long. At the return from the dressing room, Moroccan defender Karoushi was expelled at the 46th minute by the referee over a foul that deserved a yellow card at most.

As a result of this unexpected turn of events, Bado Zaki, Morocco’s head coach, had to reshuffle his strategy to allow his team to conserve its advantage.

At the 57th minute he brought Yassine Bamou to the pitch as a replacement of Abdelaziz Berrada, Olympique Marseille’s mid-fielder.

Zaki’s coaching turned out to be successful. Few minutes after he entered the pitch, Yassine Bamou doubled the score after he received a pass from Youssef El Arabi, author of the first goal.

Despite this score, the qualification to the second round of World Cup qualifiers is still not guaranteed. The fate of the Moroccan team will be known this Sunday in Bata, Ecuatorial Guinea’s capital, where it will play the second leg of the competition.