New York - Police in Saudi Arabia confiscated over 48,000 of Heineken beer smuggled into the country disguised as Pepsi-Cola cans. 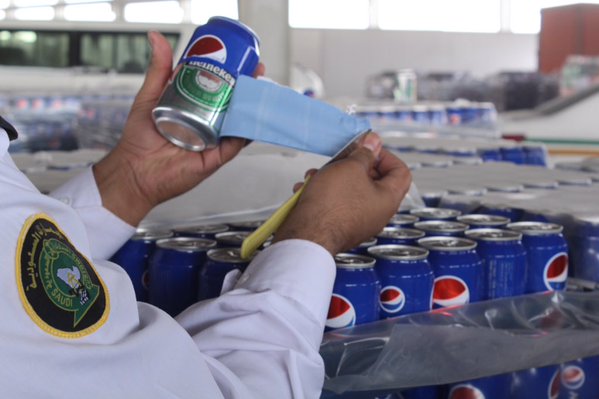 By
Karla Dieseldorff
-
Karla is an award-winning actress and producer.
Nov 13, 2015
Spread the love

New York – Police in Saudi Arabia confiscated over 48,000 of Heineken beer smuggled into the country disguised as Pepsi-Cola cans.

Saudi authorities at the Al Batha border between Saudi Arabia and the United Arab Emirates stopped the truck carrying the contraband, according to several Saudi news reports.

“A truck carrying what first seemed to be normal cans of the soft drink Pepsi was stopped and after the standard process of searching the products, it became clear that the alcoholic beers were covered with Pepsi’s sticker logos,” Al Batha border General Manager Abdulrahman al-Mahna said, according to Al Arabiya News.

A video and several photos of the confiscation was provided by Saudi Customs showing an officer peeling the Pepsi sticker off to reveal the Heineken cans.

At first sight, the Pepsi stickers in Arabic writing looked real as the disguises seemed authentic, yet when the authorities seized the pallets full of cans, they discovered the felony.

The images have gone viral on social media networks when KSACustoms posted the news on their official Twitter account.

Since the sale and consumption of alcohol in Saudi Arabia is strictly prohibited, smugglers come up with ingenious ways to get alcoholic beverages into the Muslim country.

Punishment for smuggling alcohol in Saudi Arabia can include jail time and physical whippings to citizens the same as foreigners.

In August 2014, a 74-year-old Briton was sentenced to jail time and physical punishment of 350 lashes after being arrested in Jeddah for possession of homemade wine.

Despite the country’s harsh measures on alcohol, nationals and non-nationals find ways to possess and consume the banned substances.

According to the World Health Organization, official figures of alcohol consumption in Saudi Arabia are 0.2 liters per adult, without accounting for illegal use.

Last September, Saudi authorities arrested a man at the Bahrain border with 12 bottles of whiskey smuggled into his trousers and disguised under his Saudi robe.

In addition, last April, more than 19,000 liquor bottles were seized when found hidden in a cargo between rich and tomato paste.