The video posted on Friday on YouTube shows the moment when an explosion was heard inside Stade de France in Paris. 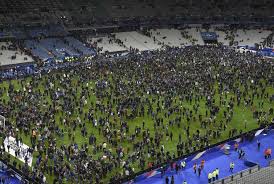 The video posted on Friday on YouTube shows the moment when an explosion was heard inside Stade de France in Paris.

The explosion erupted outside of the stadium during the friendly football match between France and Germany.

French President, Francois Holland, who attending the match, was evacuated immediately after the explosion.

The multiple attacks that targeted the French capital on Friday night have claimed the lives of 60 people so far. More than 100 others are still held hostages by the perpetrators whose identity has not been identified.