New York - Lebanon continues to mourn the victims of the two terrorist attacks that hit Beirut on Thursday. The attacks, which were perpetrated by ISIS, claimed the lives of nearly 50 people and left more than 200 others wounded. 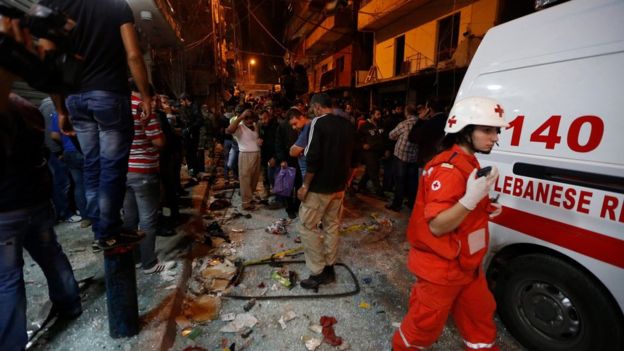 By
Karla Dieseldorff
-
Karla is an award-winning actress and producer.
Nov 14, 2015
Spread the love

New York – Lebanon continues to mourn the victims of the two terrorist attacks that hit Beirut on Thursday. The attacks, which were perpetrated by ISIS, claimed the lives of nearly 50 people and left more than 200 others wounded.

Two suicide bombers and a third who died before detonating his explosive vest, perpetrated an attack in one of the most populated suburbs in Lebanon’s capital city, Burj al-Barajneh, a mainly Shia neighborhood in Dayhey, where Hezbollah resides.

The first suicide bomber detonated himself outside a Shiite mosque, while the second one activated his explosives minutes later inside a bakery within feet of the same area.

On Friday, Zahra Atat, the widow of Adel Tormos mourned the death of her husband who courageously tackled one of the suicide bombers to prevent him from entering the mosque and killing more victims, according to UK’s The Guardian.

Termos cousin, Nazmiyeh Tarif, expressed his sorrow addressing the attackers: “They are people without conscience. May they get worse than what happened to us,” he told the paper.

“The bloodshed was barbaric,” according to eyewitnesses, who said that Hezbollah militants did not allow photographers on the scene. “There is a massacre inside and we will not let you take photos,” a militant told an AP photographer as he approached the cordoned off area.

Lebanon’s Prime Minister Talamm Salam held a meeting on Friday to discuss the twin suicide bombings and condemned the attacks. “The barbaric crime that took place in Burj al-Barajneh did not target just one region or sect but all of Lebanon from one end to the other,” Salam said.

The extremist terrorist group ISIS claimed responsibility for the Beirut bombings on social media, saying that “the aim of the attack was to kill Shia Muslims.”

Thursday evening’s terrorist attack is the second one claimed by ISIS in Beirut since January 2014, which had also targeted a Shiite neighborhood.

Less than 24 hours after the Beirut attacks, France’s capital was hit by a wave of terrorist attacks also claimed by ISIS. Innocent lives were killed because of ISIS barbaric terrorist attacks.

Millions around the world have shown their solidarity for the French people’s sorrow. Paris deadly attacks are mourned all over the world, while Lebanon’s casualties go nearly unnoticed and seen as “normal” news from the Middle East. All lives should matter.