Rabat - The imam of the Great Mosque of Paris Dalil Boubaker urged all imams in France to take part in a Friday "solemn prayer" for the victims of Paris bombings that killed at least 129 and injured about 352. 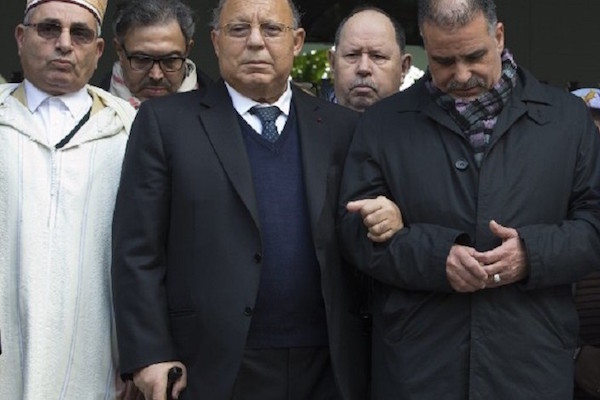 Rabat – The imam of the Great Mosque of Paris Dalil Boubaker urged all imams in France to take part in a Friday “solemn prayer” for the victims of Paris bombings that killed at least 129 and injured about 352.

“I call on all imams in France to attend a solemn prayer on Friday, to show our compassion and help ease the pain of the families,” said Boubaker during a press briefing at the Mosque of Paris on Monday.

The imam wanted to express his “solidarity,dismay and rejection to these unspeakable acts,” which killed “absolutely innocent victims.”

“We, Muslims of France, cannot help but emphasize national unity to deny all this calamity that strikes us and attacks us indiscriminately,” the imam said, adding “We are all victims of this barbarity.”

Boubaker, former president of the French Council of the Muslim Faith (CFCM), also called on French people to reject any “confusion” between France’s Muslims and “people who call themselves Muslims but who are nothing but barbarians.”

The CFCM condemned “with the utmost firmness” the “heinous and despicable attacks” of Paris, calling “Muslims in France to pray so that France can face this terrible ordeal in peace and in dignity.”

Last September, France and Morocco signed a joint statement on cooperation in the training of imams at the Mohammed VI Institute, opened in Rabat in March. The training aims to promote “an Islam with the right balance” that conforms to “values of openness and tolerance”.