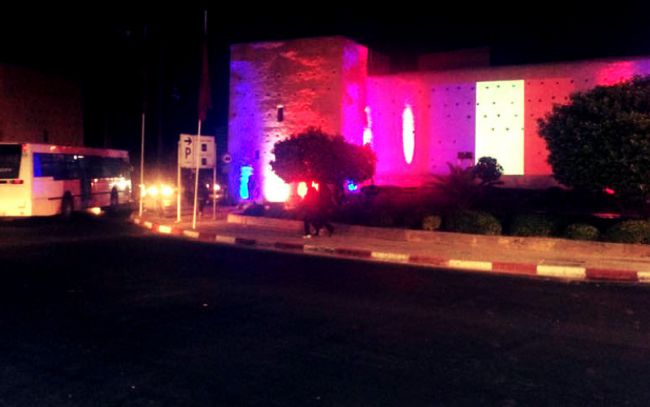 By
Larbi Arbaoui
-
Larbi is a freelance writer and assistant editor at Morocco World News.
Nov 18, 2015
Spread the love

Taroudante – A Marrakech building lights up in solidarity with the Paris terrorist attacks.

Buildings and monuments around the world lit up in France’s national colors last weekend, in solidarity with the French people, and in tribute to the victims of the deadly November 13 attacks.

The same was done in Morocco. The blue, white, and red colors of the French national flag lit up the Bab El Jdid, one of the famous gates that guards the old medina of Marrakech.

Bab El Jdid is the only building in Morocco to date to have been illuminated to pay tribute to victims of terrorist attacks in Paris.

This has not stopped fake images featuring other iconic monuments in the colours from circulating on social media, like Hassan Tower in Rabat and Koutoubia Mosque in Marrakech.

“We condemn in the strongest terms on behalf of the Moroccan people and in my own name these vile terrorist acts and express our full solidarity and support to France and its people in this ordeal,” the king said.