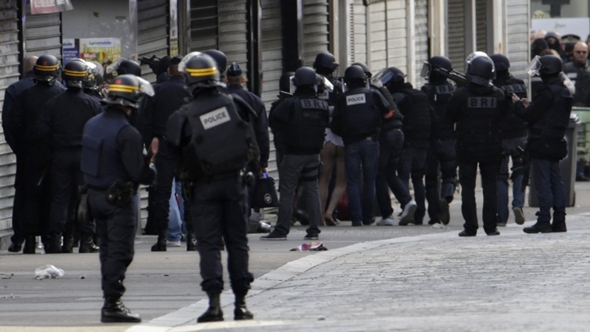 Rabat – Moroccan intelligence services have been allegedly instrumental in providing key information to French intelligence to successfully track down the terrorists who were hiding in an apartment in Saint-Denis.

The terrorist raid that occurred in Saint-Denis, a town in the northern suburbs of Paris, around 4:00 a.m. local time on Wednesday, was based on information given by Morocco’s intelligence who managed to locate the terrorists, according to sources cited by Moroccan website Le360.

French authorities ambushed a group of terrorists who were hiding in a residential apartment in the Parisian suburb. Two terrorists were killed, including a female suicide bomber who blew herself up with an explosive vest during the attack.

The second terrorist, a male, was taken down with gunfire and grenades launched by French police. Seven other suspects were also arrested on the scene, according to French media.

Moroccan intelligence groups were requested to cooperate in the capture of the fugitive terrorists behind the Paris attacks last Friday, which claimed 130 lives and left 350 others injured.

Moroccan authorities traveled to Paris and Brussels to help with the ongoing investigation to locate Abdelhamid Abaaoud, a French national who is the alleged mastermind behind the Paris attacks.

Paris prosecutor François Molins confirmed the siege was conducted after information from tapped phone conversations, surveillance, and witnesses that pointed to the possible whereabouts of Abaaoud in Saint-Denis.

The experience and know-how of Moroccan intelligence services have helped thwart a series of terrorist attacks in the past.