Rabat - After declaring war on the so-called Islamic State (ISIS) on Monday, hacker group Anonymous has begun its Operation Paris taking down more than 5,000 Twitter accounts associated with the terrorist organization. 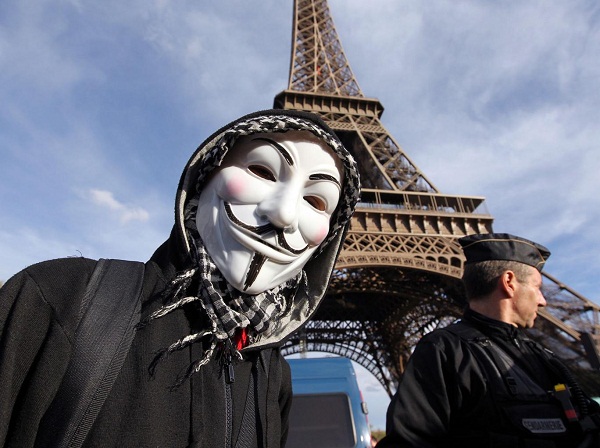 Rabat – After declaring war on the so-called Islamic State (ISIS) on Monday, hacker group Anonymous has begun its Operation Paris taking down more than 5,000 Twitter accounts associated with the terrorist organization.

The online social activist group released a French-language video in the wake of the Paris attacks declaring war on IS promising the group’s largest operation ever.

In an English version, appearing a day later, a masked speaker warned ISIS to “expect a total mobilization on our part” and expressed solidarity with the “victims, injured, and our families”. By the end of the first day the OpParisOfficial Twitter account announced that more than 3,824 Twitter accounts pro ISIS were down.

A day later, they claimed that more than 5,500 Twitter accounts were down and publishes lists of Twitter accounts allegedly associated with the terrorist organization and have subsequently been posted on the Pastebin website.

On Wednesday tweets were posted by the official account for the operation asking on hacker  participants in #OpParis to keep all lists of possible ISIS accounts private and to send them for verification, to avoid damaging those who are not guilty.

Keep all lists of possible IS accounts private. We’ll have our reporting system back up soon. No need to damage those who aren’t guilty. — #OpParis (@opparisofficial) November 18, 2015

In January,, Anonymous began a similar campaign after the Charlie Hebdo killing, where ISIS claimed responsibility for the murder of the French cartoonists. The campaign included attacks on extremist websites and finding extremist affiliated Twitter accounts so that the social network could take them down, according to Independent UK.

IS vigilantes hitting back

Meanwhile, the so-called Islamic State have hit back at Anonymous calling them “idiots” in a post on messaging service Telegram.

An ISIS affiliated account provided instructions on how to avoid hacks, according to Business Insider.

Anonymous also claim that ISIS have created a fake network to avoid Twitter accounts being verified.

PLEASE BE ATTENTION: #ISIS tried to open a FAKE #OpParis on self-styled “Anonnet”, be careful, do not go on that network, you risk your life

The total count of Twitter “pro ISIS” has been been 8,824, according to anonymous affiliate, Anonymous Aussie.