Rabat - The largest Muslim organisation in the UK has taken out an advert published across British newspapers condemning the Paris attacks which killed 129 people and injured more than 350 on November 13.

Rabat – The largest Muslim organisation in the UK has taken out an advert published across British newspapers condemning the Paris attacks which killed 129 people and injured more than 350 on November 13.

The Muslim Council of Britain (MCB) took out the advert to highlight its “united condemnation” of Friday night’s atrocities proclaimed that the militants and extremists do not represent Islam and urged people across the world to stick together.

The advert highlights unity among the Muslim population and cites examples of Muslims solidarity gestures since the terrorist act.

“With one voice, British Muslims condemn the Paris attacks unreservedly,” it reads. “The barbaric acts of Daesh (or Isis, as they are sometimes known) have no sanction in the religion of Islam, which forbids terrorism and the targeting of innocents.

“Muslims have held vigils and donated blood for the victims. It is not the terrorists who represent our faith but brave individuals like Stade de France security guard Zouheir, who risked his life to stop the attackers.

Muslim Council of Britain Secretary General Dr Shuja Shafi, said in a statement posted to the MCB website: “The advert aims to highlight how Muslims everywhere have consistently and without reservation spoken out against terror. It is important that our fellow Britons hear this message loudly and clearly”.

The notice come amid fears of growing Islamophobia in Britain after several incidents such as hard right-wing party Britain First calling for a bans on the word ‘racism’ and the religion of Islam.

On Monday, Thames Valley police arrested a woman after she allegedly said Muslims were no longer welcome to her beauty salon.

The advert ends by calling for unity in the heightened fear since the attacks in France and the events thereafter.

“The aim of attacks like those inflicted on Paris and other cities across the world is to turn communities against each other.

“As Muslims, Britons and Europeans, we must stand together to make sure they [ISIS] do not succeed.” 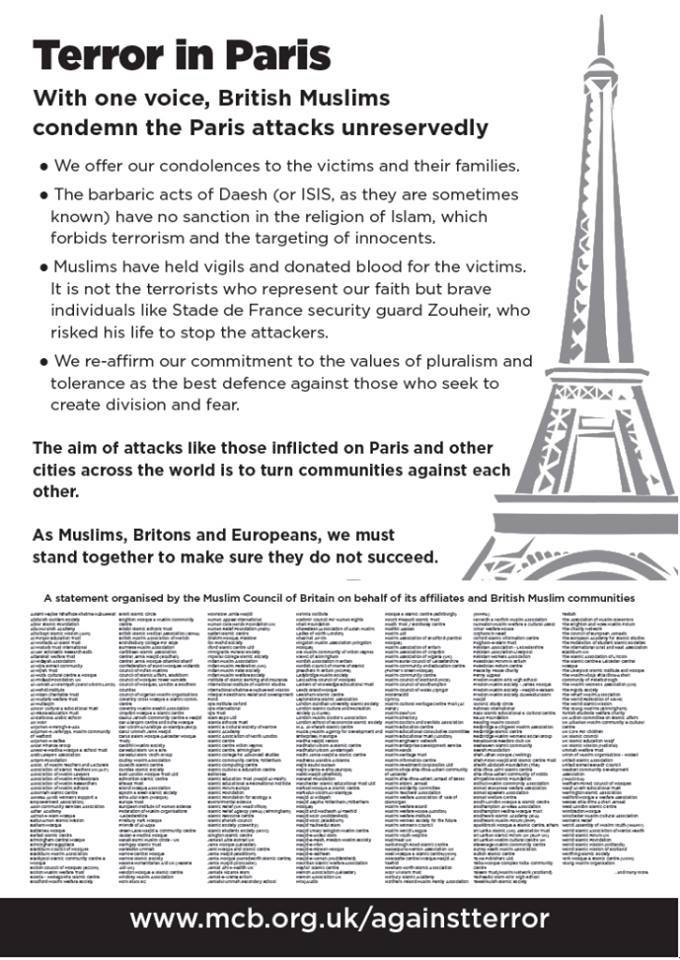