Rabat - French President, Francois Hollande will receive King Mohammed VI of Morocco on Friday afternoon in Pairs, the French Presidency said in a statement on Thursday. 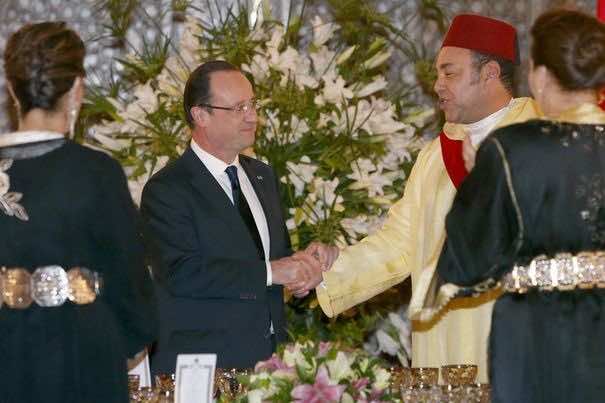 By
Adnane Bennis
-
Adnane Bennis is a national of Morocco, obtained his Bachelor’s Degree in Computer and Information Science from East west University in Chicago.
Nov 19, 2015
Spread the love

Rabat – French President, Francois Hollande will receive King Mohammed VI of Morocco on Friday afternoon in Pairs, the French Presidency said in a statement on Thursday.

The presidency announces for 4:00 p.m. a “meeting between (the president) with His Majesty Mohammed VI, King of Morocco,” the Élysée said.

The meeting comes a week after the Paris terrorist attacks, which killed 129 people and left over 350 people injured. A Moroccan engineer was among the victims.

Morocco plays a central role in the efforts undertaken by the European Union to fight terrorism and extremism.

This was put in display on Wednesday when French forces managed to kill Abdelhamid Abaaoud, as well as a female terrorist who blew herself up. The two terrorists, who were hiding in an apartment in Saint-Denis, in Paris suburb, were planning to carry out another series of terrorist attacks.

French Interior Minister, Bernard Cazeneuve, said on Thursday that a non-European country provided French intelligence services with information on the potential whereabouts of the alleged mastermind of the Paris terrorist attacks.

“It was only on November 16, after the attacks in Paris, that the Intelligence Services of country outside Europer eported that it was aware of his presence in Greece,” said today French Interior Minister.