New York- While thousands of Parisians gathered at Place de la République in Paris to mourn the victims of last Friday night’s terrorist attacks, an unknown Muslim man stood in the middle of the plaza with open arms and a compelling sign. 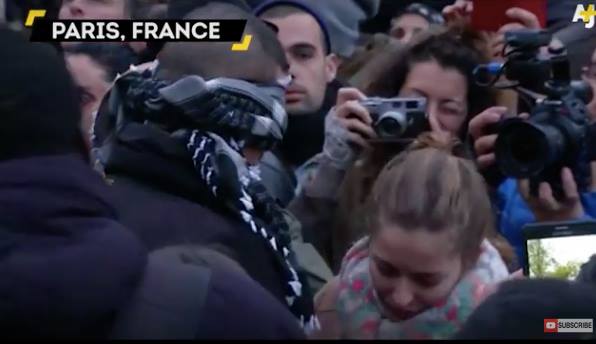 New York- While thousands of Parisians gathered at Place de la République in Paris to mourn the victims of last Friday night’s terrorist attacks, an unknown Muslim man stood in the middle of the plaza with open arms and a compelling sign.

The reactions will leave you speechless!

A blindfolded Muslim man with signs that said, “I am a Muslim and they’re saying I am a terrorist. I trust you. And you, do you trust me? If yes, hug me.”

“I have never killed anyone. A Muslim would never do that,” the other sign read.

A video of the touching scene shows the man received one hug after another, amidst tears of joy and compassion.

The footage has gone viral and social media users have expressed their feelings toward the man that courageously stood where everyone else was crying the deaths of their loved ones.

The man’s compelling action has been copied by many and Place de la République has become the place of “comfort and free hugs”.

Muslims all over the world are being blamed and targeted for the despicable actions of ISIS terrorists that do not represent Islam by any means.

Demonstrations of love and trust are one way to end bigotry and hatred among  religions.