Rabat - While Malian security forces continue their assault against the Radisson hotel in Bamako, the country’s capital, two Moroccans were reported among the 170 hostages. 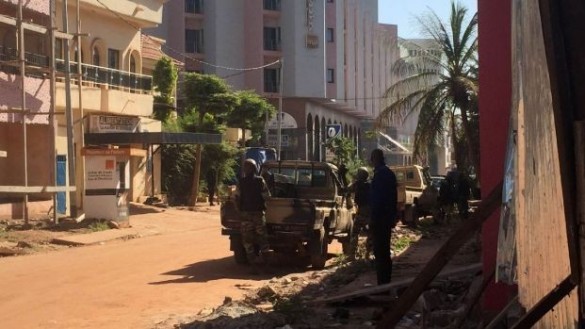 Rabat – While Malian security forces continue their assault against the Radisson hotel in Bamako, the country’s capital, two Moroccans were reported among the 170 hostages.

One Moroccan hostage has been freed and is “safe and sound” while the other remains inside, according to the Moroccan Ministry of Foreign Affairs and Cooperation.

The siege started earlier in the day when gunmen entered the hotel shooting and shouting “Allah Akbar” [God is greater] as they rounded up hostages, security told Reuters.

Malian Special Forces have since stormed the hotel and at least three people have been killed while state television shows a body covered by a blanket.
The foreign ministry said it “continues to closely monitor the situation” through the Embassy of Morocco in Mali.

Among other nationalities being held, Chinese, Indian, Belgian, Algerian, Turkish, French and American, including 12 Turkish Airlines staff who are said to have been freed.

Al-Qaeda supporters have claimed responsibility for the attack. The former French colony has battled the terrorist organization for several years.

In August, 13 people were killed by terrorist gunmen during a hostage siege at a hotel in Sevare, another Malian town.

In early 2013, former colonial power France intervened to quash a militant group associated with al-Qaeda who threatened to march on Bamako after taking control of northern parts of the country.

By July the same year, the UN in Mali took over responsibility for security after the main towns in the north had been recaptured from the Islamist militants by French and African troops.