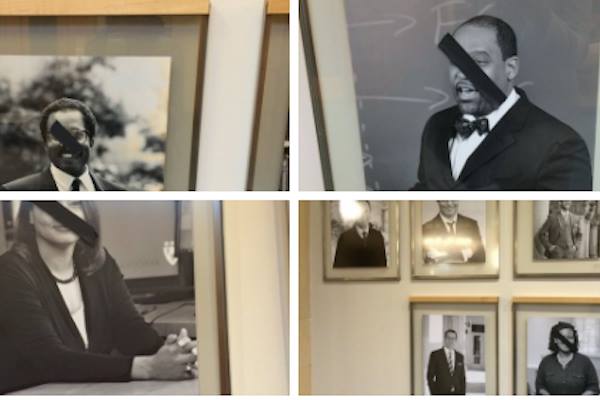 Rabat – Two separate incidents this week at Harvard Law School and University of Illinois at Urbana-Champaign highlight the growing racial tensions on American university campuses across the nation.

Black tape was found covering the faces of portraits of African American professors at Harvard Law School Thursday morning and is currently being investigated as a hate crime by the Harvard University Campus Police. Students and faculty reacted in outrage, sparking discussion on racial injustice at the university.

The black tape seems to have more racially charged weight behind it, according to a report by the New York Times. The same tape had been used in an earlier protest calling for the school to change its seal, which includes the crest of a slave-owning family.

The Royall family owned slaves in Massachusetts and is known for brutally putting down a slave rebellion in Antigua. Isaac Royall Jr. bequeathed part of his estate to Harvard, crucial for the founding of the law school. The tape that was used to cover the seal was taken and used to cover the portraits of the African American professors.

By the end of the night, the tape was gone and replaced with post-its bearing kind words from students about their professors.

In response to the incident, the Martha Minnow, the school’s dean acknowledged that racism is a problem and “exists in America and in the United Sates and in Harvard and in Harvard Law School,” the New York Times reported.

Meanwhile, students at University of Illinois at Urbana-Champaign clashed over a controversial Illini White Student Union Facebook page seeking to “organize against terrorism we have been facing from Black Lives Matter activists on campus,” according to an article by the Independent.

The page asked people to send in “any pictures you take of any black protestors on the quad so we know who antiwhites are.”

The original page was taken down hours after its creation, though it was reincarnated with a slightly toned-down description as “the first white student organization on campus.”

Another student group dedicated to supporting black women, Standing With Her, promptly reacted by posting an open letter on its Facebook page to the school’s administration, inviting it to engage in open discussion on race issues on campus.

“Posts and pages such as these stand in complete opposition to the values of mutual respect and community that define the University of Illinois at Urbana-Champaign,” said Rene Romano, UI’s vice chancellor for student affairs.

As these two confrontations show, as well as the other recent events at Mizzou and Yale, America is a long way away from racial equality. It has been 152 years since Abraham Lincoln proclaimed the end of slavery and 52 years since Martin Luther King Jr.’s “I Have a Dream” speech, and still people are denying the fact that African Americans are facing discrimination and institutionalized racism every day and even going as far as to say white people are the ones suffering.

So, what is the basis for these apparent feelings of discrimination? Overall, white Americans fare better than any other group in the categories of: neighborhood quality, homeownership, overall health, health insurance coverage, the quality of healthcare received, life expectancy and infant mortality, according to an article by the Washington Post.

That being said, these current events and survey results are just plain scary. Equality is not a zero sum game, so why does it seem like as African Americans are fighting to make progress in their civil rights, white Americans feel as though they are somehow losing theirs?

In my opinion, American culture has made great strides since the 1950s. Schools and other public facilities are desegregated, the Voting Rights Act of 1965 makes it illegal to deny anyone the right to vote based on color or race and we have a black president! Sadly, we have fallen way short of this ideal equality we as Americans love to champion. The future is not hopeless, but in order to make more progress, white America is going to have to get on board. Take a step back and look at who is really hurting.