Taroudante - A bigot in Virginia interrupted Muslims holding a meetingTuesday to discuss the building of a new mosque, calling all Muslims “terrorists.”Civil engineer Samer Shalaby was presenting building plans to residents of Spotsylvania, Virginia when the man interrupted them and began shouting, launching into a despicable rant. 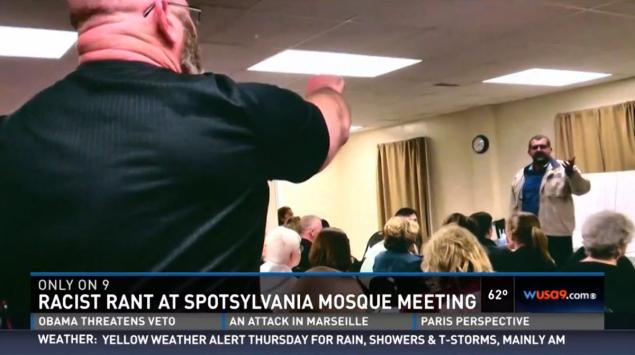 Taroudante – A bigot in Virginia interrupted Muslims holding a meetingTuesday to discuss the building of a new mosque, calling all Muslims “terrorists.”

Civil engineer Samer Shalaby was presenting building plans to residents of Spotsylvania, Virginia when the man interrupted them and began shouting, launching into a despicable rant.

Muslim leaders and the meeting’s other attendees were harassed with bigoted insults.

A man stood up, and amid claps from other racists in the audience, and began shouting at Shalaby.

In a video posted online, the angry man can be clearly heard insulting all Muslims.

“You can smile at me, you can say what you want, but every Muslim is a terrorist,” he said.

“I will do everything in my power to make sure that does not happen, because you are terrorists,” he added.

The mad man accused every person in the meeting of being a “terrorist.”

“Every single one of you is a terrorist. I don’t care what you say,” he shouted at the audience, pointing his finger at the leaders.

“Shut your mouth, I don’t want to hear your mouth,” he continued. “Everything that I can do to keep you from doing what you’re doing will happen.

A woman among the attendees stood and confronted him. She reminded him that his ancestors were also immigrants who came to US, because they were suffering from religious persecution in Europe.

“It is so sad that people are so ignorant,” Munira Salim Abdalla, who recorded the despicable tirade, told WUSA9.

“Why did your great grandparents come here,” Abdalla asked, her voice getting louder with frustration.