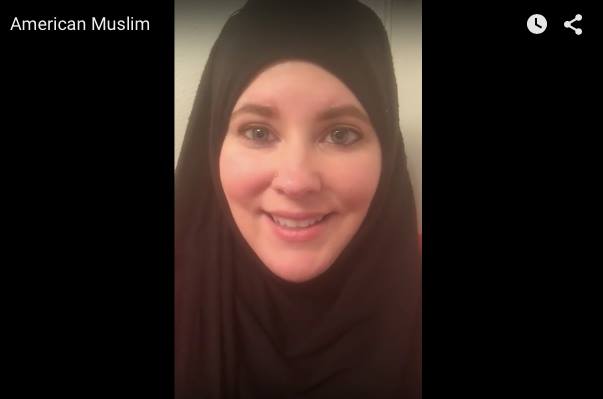 New York – Rebecca Lynn Aslasemi is an American, born and raised in the U.S.A. Her family is of Native American descent, making her a true U.S. citizen by blood as white supremacist such Donald Trump and Fox News talking heads would say.

Rebecca uploaded a video to her Facebook profile on Saturday afternoon as an act of courage, because she felt the need to speak up against all the bigotry and hatred that is happening in America toward Muslims.

“I came to Islam because I was tired of following the pack and I wanted to take the lead in my own life. This is the reasoning behind my video and the rest to come inshallah,” Rebecca told Morocco World News on Facebook.

“Sometimes people can’t see past what’s been drilled into their heads over and over by the news, movies, radio, friends, and family. They are followers and they are weak minded. They are too lazy to learn,” she added.

It was Aslasemi’s own personal choice to convert to Islam because it was the best for her and she stands behind her faith.

In her video she calls out those that diminish others based on gender, race, religion, and country. She urges people to stop discrimination, lose their fear, come together and realize we all have the same God and there are no differences between us.

“Everyone was once a refugee of some kind coming here looking for freedom and now they are so free they don’t even remember what America is supposed to stand for,” she stressed.

Her video has gone viral receiving over 100,000 likes in less than a day. This brave American Muslim hopes to keep on spreading the truth of her beloved faith, Islam. She has created the hashtag #hijabis4humanity