Rabat - Australia has once again been marred by nationwide anti-Islam rallies on Sunday ending in fights and arrests. 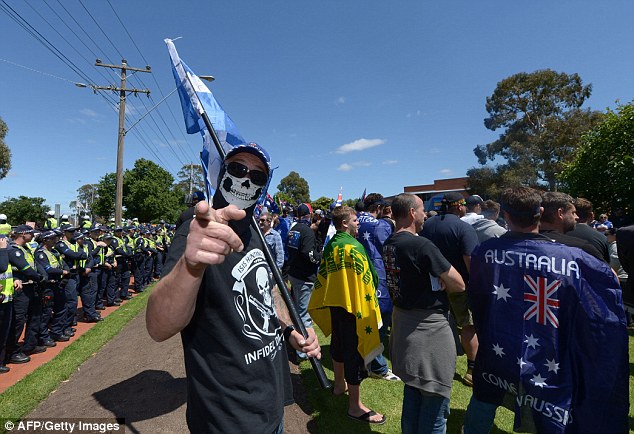 Rabat – Australia has once again been marred by nationwide anti-Islam rallies on Sunday ending in fights and arrests.

The rallies, which sparked rival counter protests from pro-diversity groups, ended in nine arrests after scuffles broke out when both camps clashed.

The anti-Islam protests, organised by the right-wing Reclaim Australia group in state capitals, were opposed by left-wing groups who held their own protests at the same locations.

About 500 Reclaim Australia supporters were protesting the planned construction of a Mosque in the city’s northern suburb of Melton. Police used capsicum spray as fights broke out between the rival groups, each attracted the same number of people.

In Brisbane, a 64-year-old man was charged with public nuisance after police say he jumped a barricade during a loud but non-violent protest.

In Adelaide, a 48-year-old man was charged with affray in the rallies at Adelaide Festival Plaza.

In other major centres such as Canberra, Australia’s capital city, Perth and Hobart protesters engaged in heated verbal arguments but no incidents were recorded, according to police.

The protests drew nation-wide criticism aimed towards the anti-Islam camps as many on their side brought small children along to the rallies.

During the protests, a right-wing affiliate told the AAP: “Some people might be here for the wrong reasons, and the right reason is making sure everyone assimilates and becomes Australian. We don’t want to be treated like we don’t belong in this town and we don’t want an organisation where people of certain origins have been making trouble.”

An anti-racism rally organiser Omar Hassan said the counter-protests’ aim was to have a peaceful demonstration to “Send a strong message against racism following, obviously, the tragedies in Paris. We’re concerned that the far right will try to mobilise legitimate fear and concern in a racist and divisive way. So we’re here to send an anti-racist and inclusive message.”

In the wake of the anti-Muslim behaviour, Australia’s Race Discrimination Commissioner Dr Tim Soutphommasane said he was concerned some are out to spread hate.

“These anti-Muslim protests represent a fringe of our society that’s seeking to promote hatred and division,” he told ABC.

Protests against Muslims and Islam have been on the rise in Australia after the country experience two lone-gunmen attacks.

In December 2014, a lone-gunmen, not affiliated with any organisation, besieged a Lindt cafe, in Sydney’s CBD.

In October this year, a police employee was killed after a 16-year-old boy opened fire at a building in Sydney’s western suburb of Parramatta.

Anti-Muslim behaviour has been on the increase as 32 Islamophobic attacks were recorded in France along with several other incidents across the globe in the aftermath of the November 13 attacks.