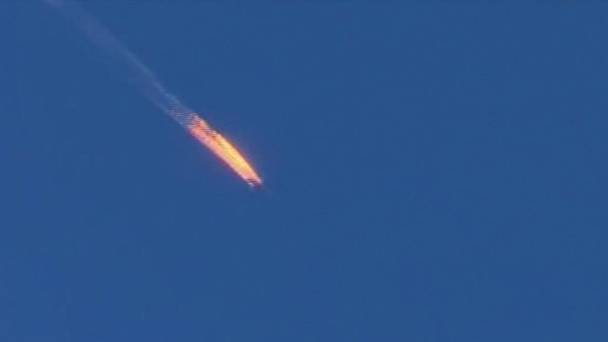 The warplane crashed into the mountainous area in the northern countryside of Latakia province, Syria. Where it is believed pro-government forces have been battling insurgents on the ground and where there had been aerial bombardments earlier, according to Reuters.

Footage emerged online showing the body of one of the two Russian pilots of the downed plane. The video, said to have been shot by rebel forces in Syria, could not be immediately verified.

Citing local sources, CNN Turk reports the second pilot was “in the hands of Turkmen forces” (Syrians of Turkish descent) and is believed to be alive.

Turkish military said the plane violated the country’s airspace in Hatay province and was warned “10 times in five minutes.”

“Our two F-16 planes on air patrol duty intervened in the plane in question on November 24, 2015, 9:24am, according to the rules of engagement,” the military said in a statement.

However, Moscow, who confirmed the downed warplane was Russian, is rebutting the claims saying it could prove the jet had not left Syrian airspace.

Also saying but said it was too early to draw conclusions, “It is just impossible to say something without having full information,” Dmitry Peskov, Putin’s spokesperson, told reporters.

According to the Russian Defense Ministry, a Russian Su-24 bomber was taking part in the campaign against ISIS in Syria was taken down near the border with Turkey.

The plane may have been shot down from the ground also stressing that the plane went down in Syria and did not violate Turkish airspace, the statement said.

Turkish President Tayyip Erdogan was briefed by the head of the military, while Prime Minister Ahmet Davutoglu ordered consultations with NATO, the United Nations and related countries, their respective offices said.

UN spokesperson Ahmad Fawzi said the incident will likely complicate anti-terrorist efforts in Syria, at a media briefing in Geneva.

About 1,700 people have fled the northern Syrian region to the Turkish border due to surge in fighting over the last three days.

Hundreds of Russian aircraft have flown over as well as bomb northern parts of Syria in its combat missions against ISIS since September. Activists claim the strikes have hit Western-backed rebel groups but Moscow says they have targeted only “terrorists”.

Turkey has long warned against violations of its airspace by Russian and Syrian aircraft. The downing comes in the wake of news that last month, officials said Turkey had intercepted a Russian jet that crossed its border, as well as two Turkish jets had been harassed by an unidentified Mig-29.